reference quotes for video with links below:

"Police have now arrested 2 men in the Jussie Smollett investigation -- 2 men with ties to "Empire" -- and TMZ has learned they were booked for battery.

The men are brothers from Nigeria named Olabinjo and Abimbola Osundairo, and Chicago cops are now calling them "potential suspects" ... as opposed to persons of interest. We know it was their home cops raided Wednesday and seized a long list of potential evidence ... including several bottles of bleach...

As you know, Jussie has stated the men in the dark, grainy image released last month are definitely his attackers. Police are not confirming the Osundairo brothers are the men in that photo."

Cops are releasing the Osundairo brothers and they won't be charged.

Chicago PD says, "Due to new evidence as a result of today's interrogations, the individuals questioned by police in the 'Empire' case have now been released without charging."

"Two men who were being questioned in connection with an attack reported by "Empire" actor Jussie Smollett have been released without charge, the Chicago Police Department said Friday.


The men, who were arrested Wednesday, were released "due to new evidence as a result of today's interrogations," said Chicago police Chief Communications Officer Anthony Guglielmi. "And detectives have additional investigative work to complete."
The men arrested were the same two who police previously said were being viewed as "potential suspects," Tom Ahern, Chicago police communications deputy director said earlier Friday."

"The two brothers arrested in connection with the reported attack on the “Empire” star Jussie Smollett were released without being charged on Friday, a police spokesman said. They are no longer considered potential suspects.

“Due to new evidence as a result of today’s interrogations, the individuals questioned by police in the ‘Empire’ case have now been released without charging and detectives have additional investigative work to complete,” Anthony Guglielmi, the Chicago Police Department spokesman, said in a statement...

A representative for Smollett did not immediately respond late Friday to a request for comment on the latest development."

JUSSIE GETS A LAWYER  (linked to Trump)

"The release of Olabinjo and Abimbola Osundairo at near 9 PM Chicago time surely means that whatever that “new evidence” is, it is a clear game changer for the ever twisting and turning Empire star case.

Adding to that, attorney Michael Monico has been now been retained by Smollett.

The Chicago-based defense lawyer is a frequent go-to-guy for high profile cases. In the past year he represented Donald Trump’s ex-right hand man Michael Cohen in his dealings with Robert Mueller’s investigation and other related federal cases. Having seemingly spilled the beans to the ex-FBI Director to some extent or another on his lying to Congress and more, Cohen is set to start a three-year prison sentence next month."

"Jussie Smollett, the "Empire" actor who claims he was assaulted by white supremacists screaming "MAGA COUNTRY" in the middle of a polar vortex in Chicago, just hired the best defense lawyer in town, Michael Monico, after the two persons of interest in the case were released by the Chicago Police Department." 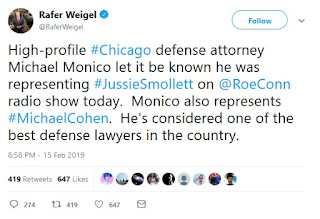 "Also on Friday, defense attorney Michael Monico confirmed to Variety that he is now representing Smollett, one of the stars of “Empire.”

Monico is a high-powered defense attorney with decades of experience. He recently represented Michael Cohen, President Trump’s former lawyer, in his criminal case."

Posted by willyloman at 7:31 AM