The following quotes come from an essay published by The Atlantic yesterday. It was written by neocon and former Bush II speech-writer, David Frum, who not only supported the illegal invasion and occupation of Iraq, but is also credited for coming up with the phrase "axis of evil"

Frum left the White House in 2002. Apparently he was fired when his wife sent someone an email bragging her husband came up with that line.

After that he went to work for the neocon American Enterprise Institute.

I post this because you would not expect a globalist neocon to have views like these on the immigration debate. It is notable that the Bush administration didn't come up with Comprehensive Immigration Reform until well after Frum left the White House

Of course, Big Business and the Fake Left are up in arms about it. It is a good read no matter what side of the debate you come down on. (my thoughts in red)

If Liberals Won’t Enforce Borders, Fascists Will by David Frum

Here Frum lays out the truth about immigration who it hurts and who benefits.

... From an economic point of view, immigration is good because it encourages specialization and thus efficiency. In a low-immigration world, an American accountant might have to pay $25 or $30 an hour for yard services by American-born landscapers. At that price, she might choose to do the yard work herself. If higher immigration lowers the price of landscaping work to $10 to $12 an hour, she may hire a landscaper and devote her newfound free time to extra accounting work. Instead of leaving the office at 5 p.m. to cook dinner for her family, she can stay until 6 o’clock and order from Postmates as she drives home. Or she can buy more services than she otherwise would. A lower bid from an immigrant-employing contractor might allow her to renovate her kitchen this year rather than postponing it to next year.

But all of this only happens because lower-earning immigrants displace the Americans who used to do the work at higher costs. You may ask, “So what happens to those displaced Americans?” The economist’s answer is that, pressed by immigrant competition, displaced American workers are driven to “upskill.” Perhaps a former landscaper learns some Spanish, and thus can act as the foreman of a crew of immigrants. Perhaps he shifts to sales or design work. Either way, the economic models say, everybody is better off.


You may further ask, “Does this really happen? Don’t at least some displaced American workers end up unemployed or underemployed, unable to find work at anything close to their old wage level? Aren’t both American-born men and American-born women of prime working age less likely to work today than in the 1990s?”

Yes, all of that is true. But when workers quit the workforce, they disappear from the statistical samples on which the economic models are built. Labor-force statistics count only those in the labor force. If an American-born landscaper successfully upskills to foreman, his higher pay is recorded and measured. If an American-born landscaper retires early on a disability benefit, his lower income is not recorded and not measured. From a labor economist’s perspective, he has ceased to exist. Immigration’s economic costs and benefits will be calculated without reference to him.

The battles over the accuracy of the models of immigration’s economic effects are as protracted and vicious as any in the social sciences. We can’t settle them here, and don’t need to. Instead, let’s focus on what economists generally do agree on.

First, adding millions of additional immigrant workers every decade makes the American economy in the aggregate much bigger than it would otherwise be.

Second, immigration contributes very little to making native-born Americans richer than they would otherwise be. In 2007, in the course of arguing the economic case for more immigration, George W. Bush’s White House tried to quantify the net economic benefits of immigration to native-born Americans. The advocates’ own calculation yielded a figure of $37 billion a year. That’s not nothing, but in the context of a then–$13 trillion economy, it’s not much.

Third, the gains from immigration are divided very unequally. Immigrants reap most of them. Wealthy Americans claim much of the rest, in the form of the lower prices they pay for immigrant-produced services. Low-income Americans receive comparatively little benefit, and may well be made worse off, depending on who’s counting and what method they use.

And finally, while the impact of immigration on what the typical American earns is quite small, its impact on government finances is big. Estimates from the National Academy of Sciences suggest that on average, each immigrant costs his or her state and local governments $1,600 more a year in expenditures than he or she contributes in revenues. In especially generous states, the cost is much higher still: $2,050 in California; $3,650 in Wisconsin; $5,100 in Minnesota.

Immigrants are expensive to taxpayers because the foreign-born population of the United States is more likely to be poor and stay poor. Even when immigrants themselves do not qualify for a government benefit—typically because they are in the country illegally—their low income ensures that their children do. About half of immigrant-headed households receive some form of social assistance in any given year.

Assertions that federal tax revenue from immigrants can stabilize the finances of programs such as Medicare and Social Security overlook the truth that immigrants will get old and sick—and that in most cases, the taxes they pay over their working life will not cover the costs of their eventual claims on these programs. No matter how many millions of immigrants we absorb, they can’t help shore up these programs if they’ll need more in benefits than they can ever possibly pay in taxes. If a goal of immigration policy is to strengthen Social Security and Medicare, it would be wise to accept fewer immigrants overall, but more high-earning ones, who will pay more in taxes over their working years than they will collect in benefits in retirement. Under the present policy favoring large numbers of low-wage earners, the United States is accumulating huge future social-insurance liabilities in exchange for relatively meager tax contributions now....

Essentially, this is what he calls for

...Americans have the same responsibility to do what is best for Americans. A smaller immigration intake would dramatically slow the growth in the foreign-born share of the population, better shielding democratic political systems from extremist authoritarian reactions. Cutting the legal annual intake in half—back to the 540,000 a year that prevailed before the Immigration Act of 1990—would still keep the U.S. population growing strongly even if native birth rates never recover from their present deeply depressed levels.

And shifting that intake sharply away from family reunification (by, for example, ending preferences for adult siblings) would enable the U.S. to emphasize acceptance of highly skilled, high-earning immigrants—more doctors from Nigeria, say, or software engineers from India. Fewer, but higher-earning, immigrants would contribute more to Medicare and Social Security, while requiring less assistance from state social-welfare programs for themselves and their children...

... President Trump seethes against illegal border crossings. Yet at least five of his golf resorts employed undocumented laborers for the first two years of his presidency. At one of his resorts, fully half the winter-season employees worked illegally.

The Trump Organization will almost certainly face no consequences for its lawbreaking. Scofflaw employers rarely do. To its credit, the Trump administration has stepped up workplace enforcement somewhat since 2017. But while immigration investigations and audits are increasing, they remain rare.

The massive deportation of people who have lived in the country for a long time would serve no one well. But employers of unauthorized labor should face and fear fines sufficient to deter lawbreaking. If employers stop hiring undocumented workers, those workers will not be induced to cross the border in the first place.

Even more urgently, employers who take advantage of immigration status—to cheat workers of their pay, or harass or abuse them sexually, or force them to work in unsafe conditions—should be prime targets for criminal prosecution. As states raise their minimum wages, the temptation to hire people of precarious immigration status will intensify. It is the workplace that most needs additional enforcement resources...

Americans are entitled to consider carefully whom they will number among themselves. They would be irresponsible not to consider this carefully—because all of these expensive commitments must be built on a deep agreement that all who live inside the borders of the United States count as “ourselves.” The years of slow immigration, 1915 to 1975, were also years in which the United States became a more cohesive nation: the years of the civil-rights revolution, the building of a mass middle class, the construction of a national social-insurance system, the projection of U.S. power in two world wars. As immigration has accelerated, the country seems to have splintered apart.

Many Americans feel that the country is falling short of its promises of equal opportunity and equal respect. Levels of immigration that are too high only enhance the difficulty of living up to those promises. Reducing immigration, and selecting immigrants more carefully, will enable the country to more quickly and successfully absorb the people who come here, and to ensure equality of opportunity to both the newly arrived and the long-settled—to restore to Americans the feeling of belonging to one united nation, responsible for the care and flourishing of all its people...

Through much of the 20th century, the United States received comparatively few immigrants. In the 60 years from 1915 until 1975, nearly a human lifetime, the United States admitted fewer immigrants than arrived, legally and illegally, in the single decade of the 1990s...

... Yet rather than fading into history, immigration has only been accelerating. From 1990 to 2015, 44 million people left the global South to find new homes in the global North. They came from Latin America, Africa, and Asia...

... By 2027, the foreign-born proportion of the U.S. population is projected to equal its previous all-time peak, in 1890: 14.8 percent. Under present policy, that percentage will keep rising to new records thereafter...

... Relative to the existing native-born population, the migration of 1880–1914 was larger than that of today... 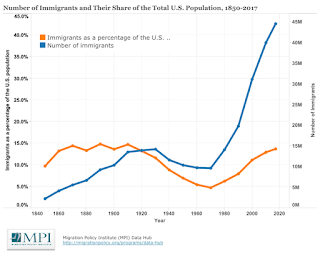 Across the developed world, very high levels of immigration have coincided with widening class divisions, the discrediting of political and economic elites, and the rise of extremist politics. And immigration pressures will only intensify in the decades ahead...


And for the anarchists among you.

With immigration pressures bound to increase, it becomes more imperative than ever to restore the high value of national citizenship, not to denigrate or disparage others but because for many of your fellow citizens—perhaps less affluent, educated, and successful than you—the claim “I am a U.S. citizen” is the only claim they have to any resources or protection. Without immigration restrictions, there are no national borders. Without national borders, there are no nation-states. Without nation-states, there are no electorates. Without electorates, there is no democracy. If liberals insist that only fascists will enforce borders, then voters will hire fascists to do the job liberals refuse to do.


Overall its a good article that doesn't end up going where I expected it to. He is apparently not supportive of Comprehensive Immigration Reform, at least not in the way one expects them to argue these days.

Frum is calling for reform but in the opposite direction most Big Business folks call for it which makes this an interesting read.

Lots of stuff to consider. Lots of facts that most in the complicit media would rather you didn't know.

It's worth the time to read the essay.