Dust to Dust:Testing for Residue of Conventional High Explosives in Ground Zero Dust is a Possibility


UPDATE: Well, no replies as of yet. Perhaps dis-info campaigns such as “micro nukes”, “ray-beams from space”, and “nano-thermite” have won the day after all.
(the following quote was added to my article when they posted it on Intel Hub in June of 2012. They added this bit of disinfo to go along with my serious research kinda like Youtube adds shit to your videos if they don't like it's content)
“Editors Note: It is important to point that micro nukes were most likely used at the base core of the WTC buildings in conjunction with nano-thermite and C-4.” The Intel Hub June 25th 2012

(now back to original article)

Over the years I have been one of the most outspoken proponents of running standard tests on the dust collected from Ground Zero to see if in fact there are residual traces of conventional high explosive residues present in it. This type of test has been called for by many of the so-called 9/11 Truth “researchers” but they never seem to find the time to do it and then, in the end, when I pressed a few of them on the subject, they flatly refused for “PR” blowback reasons. Or so they told me.

“However, our detractors could be counted on to do their best to use a negative result against us for P.R. purposes. They would say that we have a non-scientific belief, since a negative outcome from an experiment fails to shake it.    Thus, the potential costs of doing what you’re proposing and coming up empty-handed, or worse, must be considered.”  Gregg Roberts of AE9/11 truth

I even went so far over a year ago to carefully construct and publish what I thought was the best process by which to run the tests themselves.

After years of research, it is my hypothesis, which I still stand behind to this day, that the Twin Towers were taken out via an explosive controlled demolition and that during the design stages of the process, they relied too heavily on the use of det cord in the floor systems (see image below) which led to the vaporization of most of the truss systems which was accidentally revealed (the metal micro-spheres) when the RJ Lee Group did their Composition and Morphology study of the Ground Zero dust samples for Deutsche Bank .

The RJ Lee study also found that temperatures had been reached “at which lead would have undergone vaporization”– meaning 1,749°C (3,180°F).

Another study was carried out by the US Geological Survey, the purpose of which was to aid the “identification of WTC dust components.” Besides also finding iron particles, the scientists involved in this study found that molybdenum had been melted. This finding was especially significant, because this metal does not melt until it reaches 2,623°C (4,753°F). Griffin 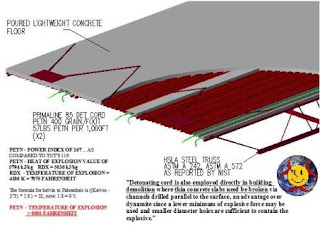 Why do I bring all of this up now?


Simply put: I now have several small (very small) and as of yet unconfirmed Ground Zero dust samples and I am looking for your input as to what to do with them.

After prolonged communications with another Truth advocate, samples were collected by him and forwarded to me for testing purposes. At this point and until I am given permission to disclose this individual’s identity, I will refrain from doing so. Suffice to say this person has an extensive history with the Truth movement and has worked with various high profile groups over the years.

Let me also say that this person has put no preconditions on the types of testing or the institutions that will be eventually chosen for the processing, in the event that course of action is pursued.

Yes. It is not yet a given that even I will have these tests run. There are several factors to consider, hence this article.

The samples are small. Some, I feel, are too small for the full process which I describe in the above linked article which would require dividing the samples into at least 4 portions each: one to test to see if it is from Ground Zero Sept. 11th; one to send to an independent lab for evaluation of the presence of high explosive residues (preferably we would send to two separate facilities as a control); one to test video live feed video with a forensic approved field test kit; and one to keep as a control of the sample in it’s pristine condition.
That’s a lot of testing and these samples are rather small to say the least. The verification step and the field testing steps along with the control sample are mandatory parts of this process. I will test nothing if I can’t verify that it is actually from Ground Zero.
Another aspect of this decision making process is the fact that I don’t have a clear chain of custody for each of these samples. This is something that would seriously inhibit our effectiveness given a positive result of the testing. Questions could always arise as to the samples having been either accidentally or purposefully tainted. Also, it would hinder potential legal processes in the future.
Cost of course is a big issue. If the choice is made to run these tests, to implement the process which I have laid out, then the cost would be rather high and as many of you may know, I certainly can’t afford to shoulder that burden fully myself. There would have to be some kind of fund set up from donations from the Truth community to help with the costs. Yet, I think given the determination of the remaining Truth advocacy movement, and my commitment to complete transparency of the process, I think this stumbling block would be the easiest to overcome.
There are serious questions as to whether or not I could get a certain lab to test the samples and see if they match their existing fingerprint of 9/11 Ground Zero dust. They may not be interested for political reasons or it could be cost prohibitive. As that I have yet to approach them, I do not know at this time.
These are serious concerns that need to be addressed. But I am not the only one involved here.
The Truth Movement, or what’s left of it after the various sell-outs and Sunstein agents have done their work over the years, is kind of at an impasse. Is more evidence really needed to prove that the Twin Towers didn’t collapse due to gravity? Don’t the majority of Americans and free thinking people across the world already accept the fact that the official story of 9/11 is bullshit? Will new hard scientific evidence push others to conclude what we have had to understand or open up the doors to a new investigation into the fact that 9/11 was a staged false flag event meant to kick off this “New American Century” of endless, limitless wars of aggression and the demolition of our civil rights and the creation of the for-profit police state in America?
Or will the American people say they simply don’t care like those clowns on CNBC did when talking about unelected bankers ruling the world?
Ultimately, I don’t know. I’ve known this material was coming for a week and now that it’s here, I have yet to formulate an unshakeable conclusion regarding these matters.
The Truth movement has always been an unofficial investigation into the truth of what happened on Sept. 11th 2001. This is the first type tests we should have run at the very beginning. They are tests that should have been run by FEMA and NIST and certainly the 9/11 Commission and the New York Attorney General’s office. But they weren’t and to my knowledge, no one in the Truth movement has run them either.
So here we are. Here I am. It’s not my movement, what’s left of it, it’s ours.
My question to you is this; please read the proposed testing procedure I link to above and tell me… should we do it? Is there a better way? Is it worth it? Is there any rational explanation why we shouldn’t do it?
Insight? Ideas? Tell me I’m an idiot? The floor is yours.

Posted by willyloman at 2:26 PM