Terrorists as Person of the Year: The TIMES they are A-CHANGIN’ (archived)

I am going to propose a scenario for you. You ready? Here we go…
A video surfaces of an Occupy Wall Street protester sneaking up on a NYPD police armored personnel carrier on a calm winter morning, there is no combat, there is no action taking place at all…  and then he whips out a RPG and fires, point blank, taking out the cops in the carrier and putting at risk any civilians in the area with the threat of flying shrapnel and debris.
Let me ask you: do you think our MSM would show that video and then try to make those Occupy Wall Street protesters out to be heroes? Or, do you think that the MSM outlet, let’s say NBC, would consider that video is proof that Occupy Wall Street and the associated groups who support them are actually domestic terrorists?
Is there any real question as to how the story would be handled?  Of course not.
(More likely, here in America and certainly in New York, the REAL story would be that the NYPD Intelligence division got an informant to find a homeless guy who was a bit mentally ill and then framed him for the attack so that Bloomberg could look “tough on terror”)
Right now on MSNBC and NBC’s front pages is a video of just such an action. The only difference is it takes place in Homs and the ones firing the RPG are the “protesters” in Syria.
NBC portrays them as heroic for this act of terrorism. Like Lybia, this is the new “terrorist as heroes” meme being force-fed to the American public on a daily basis.
Look at these two images; one taken from the NBC story I just mentioned and the other is the cover of Time magazine depicting their choice for Man of the Year.


Right now there is a great deal of empathy and support for the Occupy Wall Street protesters, regardless of how fake “progressive” news mediums (like the Rachel Maddow Show) are trying to demonize them and their struggle for social justice and economic equality. So of course, the globalist rag TIME is attempting to equate the fake Syrian and Russian “protests” with the Occupy Movement, as if one were the exact same thing as another. If you support the Occupy movement, then by extension, you have to support our destabilization campaigns in Lybia, Syria and Russia run by absolute terrorists.
The reason the guy being interviewed in the NBC piece is hiding his identity is because he is not a Syrian special forces defector. He is hiding his identity so that no one can prove that he ISN’T. Facial recognition software and his previous associations would eventually show the man is lying, lying about what he once was, where he came from, and more importantly what he CLAIMS the Syrian authorities told him to do to the civilian population. But as obvious as all of that is, NBC still reports this tripe trash as “news” and takes the masked terrorist at his word.
“Mohamed’s  story is impossible to verify…” claims the NBC “journalist… but he goes right on allowing Mohamed to keep spinning his yarn as if it were gospel.
(Do you think that NBC would run with a prime time news story featuring a guy in a mask claiming that 9/11 was an inside job with no verifiable evidence to support his claims? Hell, there are thousands who would go on the air without the mask and with verifiable evidence, and they are routinely ignored and demonized by the MSM.)
Nothing could be more obvious.
TIME could have selected many images of protesters to adorn the cover of their rag. Many stand out in my mind… 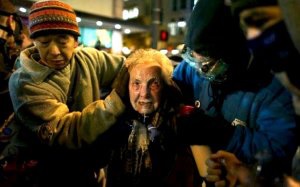 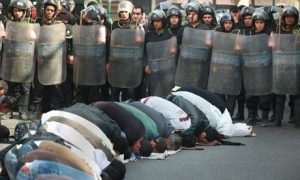 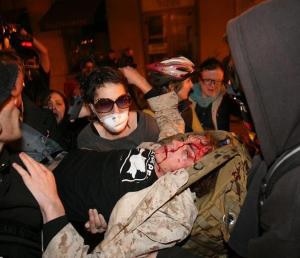 How about Scott Olsen or the one of him standing at attention defending the other protesters when he was shot by a cop at point blank range?
Any of these or the myriad of others could have easily made the cover of TIME’s Person of the Year edition. But they didn’t. Instead, TIME celebrates the hidden cowardly lying terrorists of Hillary Clinton’s destabilization campaigns.
Ten years after “the terrorists” attacked us and killed some 3,000 civilians, an al Qaeda linked NTC has an office in DC and TIME magazine names terrorists as persons of the year. Meanwhile Obama and the new Clinton regime is busy demoing the New Deal and dismantling all those freedoms George Bush told us the terrorists hate us for.
There’s some “CHANGE” for you.
Only in America can someone come that far back from horrible press in so short a period of TIME. Perhaps Charlie Sheen will give the terrorists a run for their money, but that remains to be seen.

Posted by willyloman at 7:51 AM