by Scott Creighton (archived from Aug. 2008)
Yesterday, the National Institute of Standards and Technology (NIST), a division of the Department of Commerce, finally released it’s report on the cause of the mysterious collapse of Building 7 of the World Trade Center (WTC) complex. There have already been several to jump out in front and claim that this puts an end to the “conspiracy theories” that have surrounded Building 7’s inexplicable destruction, since it happened on Sept. 11th 2001.
“We really have a new kind of progressive collapse that we have discovered here, which is a fire induced progressive collapse. In fact, we have shown for the first time, that fire can induce a progressive collapse.”. Shyam Sunder. (first time in history and flies in the face of what we know about engineering and the laws of physics. But, they NEVER tested for explosive residue and yet, this is the “first time” this “new” phenomenon occurred? Right.) 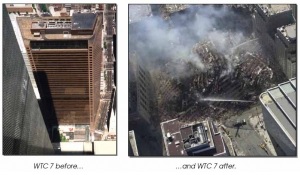