A new 9/11 Memorial interactive timeline uses photos of Building 5 in place of real images of Building 7 in order to make the damage to the building look more severe. Ironically, Building 5, though it suffered tremendously more damage from falling debris and fires on that day, actually remained standing for 2 months after 9/11, while the building they choose not to show, the real Building 7, with far less damage, collapsed into its own footprint that day.
Now let’s remember what Shyam Sunder, head of the NIST investigation said about their findings on the complete destruction of Building 7 that day…

The official story of 9/11 is that for the “first time” in history, normal office fires caused the complete global collapse of a steel and concrete hi-rise structure. With that in mind, let’s take a look at the new 9/11 Memorial photo, shall we?


This is the image that they claim is of Building 7 burning. It’s actually Building 5 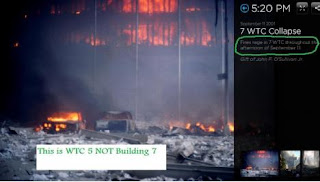 New 9/11 Memorial lies to you
This is building 5 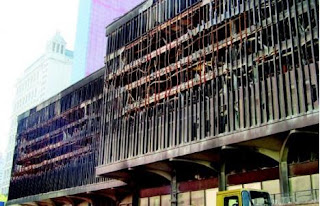 The building pictured above is Building 5 and below, this is the real Building 7 and the fires that NIST claims caused its global collapse at 5:20pm on Sept. 11th 2001. 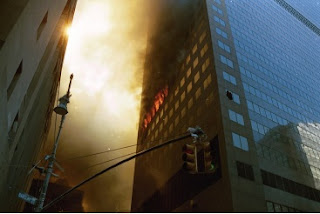 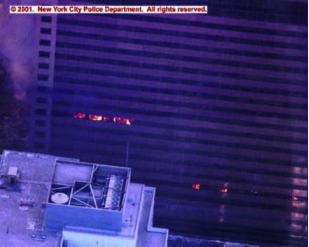 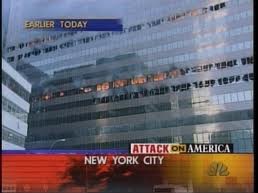 As you can see, the fires in Building 7 were burning out as the photos were being taken on Sept 11th 2001.
Now, to see the contrast between Building 5 and Building 7, how they ended up that day.
First, look at Building 5, which the “experts” falsely identified as Building 7, still standing on Sept 12th 2001. Notice Building 6 next to it, also still standing…. 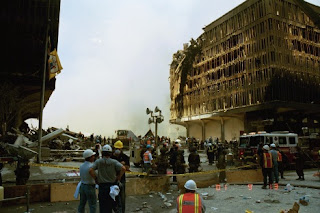 and this is what happened to Building 7. It was dropped neatly in between two other buildings, not part of the WTC complex… 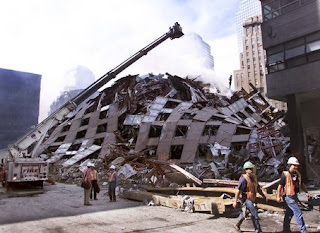 The man who provided the National Institute of Standards and Technology (NIST) the reason that they shouldn’t test for high explosives, Mark Loizeaux, said it wasn’t a controlled demolition because it didn’t “sound” like one and because there were not “enough” blown out windows around the Trade Center complex area.
It just so happens that Mark Loizeaux owns the world’s leading explosive controlled demolition company, CDI, and he was in New York on 9/11, he called people he knew in the area when the buildings were still standing and told them they were coming down, he had studied the construction designs of the Twin Towers, and he was in Building 7 just two months prior to Sept. 11th 2001… around the same time an employee of CDI, Tom Sullivan, received his explosives handler’s license in New York City.
Oh yeah, CDI was in charge of cleaning up the dust and other materials AFTER 9/11…

”We’re part of a team in a 14-month project with the Deutsche Bank, including cleaning up the 9/11 dust.”"I did a report on the World Trade Center when I was at college and I knew exactly how it was built .” “so when the SECOND plane hit I said: “Start calling all the cellphones, tell them that the building is going to come down.” “Of course, building number 7, which is where the emergency management headquarters was, was on fire. I’D BEEN IN THAT OFFICE TWO MONTHS BEFORE.” Mark Loizeaux

Also of note, Protec, a company that CDI uses to monitor seismic activity in neighboring buildings when they do an explosive controlled demolition, just happened to be there as well, and they had their equipment set up.

Now you might think that the 9/11 Memorial Timeline just made a simple mistake. But if anyone is an expert on the WTC complex and 9/11, it’s them right?  How many odd coincidences are people going to ignore when it comes to 9/11? multiple demolition crews on site on 9/11 calling people in the area warning them of the impending destruction of the buildings… getting licenses to plant explosives and visiting the building that is later misidentified by those experts over at the 9/11 Memorial…
It used to be tragic how much the people of this country will put up with. Now it borders on farce.

Posted by willyloman at 3:22 PM