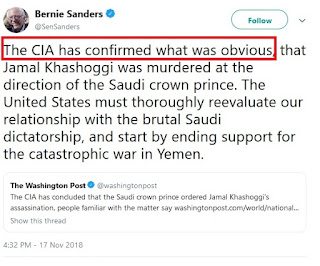 AS Bernie Sanders once again promotes the globalist propaganda of the day (as he has done from Yugoslavia to Libya to Syria to the White Helmets et al), the New York Times has penned an article promoting the same phony CIA "conclusion" that the Washington Post wrote about two days ago (and I covered exposing just how vapid and devoid of actual evidence the CIA "report" actually is)


"The C.I.A. made the assessment based on the crown prince’s control of Saudi Arabia...has buttressed its conclusion with two sets of crucial communications" NEW YORK TIMES Nov. 16, 2018

In effect, the Times says the CIA believes Mohhamed bin Salman MUST be responsible for the murder of Jamal Khashoggi (in spite of the fact that no body (or parts in a well) has been found) because... he's responsible for everything that happens in Saudi Arabia.

In spite of what Sheepdog Sanders said in his Tweet, the CIA has confirmed nothing other than they have nothing to connect the disappearance of Jamal Khashoggi to MbS.


Maybe a recording of Khashoggi's so-called death would confirm that element of Sanders' statement (if things like Deep Fakes didn't already exist and were being openly talked about in forums as viable and legitimate means by which the Deep State can get what it wants) and if it were confirmed by independent sources to be legitimate...

Maybe a recording of the full conversations between MbS' brother and Khashoggi and that "tell your boss" call were to be released and again confirmed to NOT be just another Deep Fake...

If all those things were to take place, maybe one could claim the CIA (experts in the manufacture of Deep Fakes) has now "confirmed" Khashoggi was killed under orders from MbS but until then...

... we are just expected to take the CIA's word for it... like Sheepdog Sanders has... again.

Back during the late 90s Sanders supported Bill Clinton's and NATO's humanitarian bombing campaign on Yugoslavia because our intelligence assets told us Milosevic was evil. Turns out, the country was just getting too close to something called socialism and Russia at the time.

In the lead-up to Hillary Clinton's Libyan regime change operation, Bernie voted in favor of a resolution supporting that effort and latter said "In Libya, Secretary Clinton, as secretary of state, working with some other countries, did get rid of a terrible dictator named Gadhafi"

To Bernie, the "socialist", Assad, Allende, Gaddafi and Mossaddegh were all "dictators" ...


"Yes, we could get rid of Gadhafi, a terrible dictator, but that created a vacuum for ISIS. Yes, we could get rid of Assad tomorrow, but that would create another political vacuum that would benefit ISIS. Getting rid of dictators is easy....you go back to Mossaddegh in Iran, you go back to Salvador Allende who we overthrew in Chile, you go back to overthrowing Saddam Hussein in Iraq. It is relatively easy for a powerful nation like America to overthrow a dictator..."source for all of the quotes above

Assad, Mossaddegh and Allende were ELECTED to office. Gaddafi was beloved and held an honorary position in Libya where there were free and open elections.

When you combine those facts with the fact that all the nations we regime changed with those "dictators" as Sanders described them were in fact SOCIALIST NATIONS... one has to ask one's self just how SOCIALIST is Bernie Sanders.


"But the new assessment by the C.I.A. is sure to harden the resolve of lawmakers on Capitol Hill to continue to investigate the killing of Mr. Khashoggi and punish Saudi Arabia."  NEW YORK TIMES Nov. 16, 2018

MbS needed punishing. He needed punishing and therefore our political class needed to press for the punishing because MbS isn't fulfilling his promises he made in March of 2018 when he came here and met with all our billionaire oligarchs and told them he was going to neoliberalize Saudi Arabia in a heated rush allowing them to make tons of profits off the privatizations and other neoliberal policies they always enact when doing such things to nations across the world.

" (MbS) doesn’t seem to understand that there are some things you can’t do.” WP

"At least 13 countries have expressed interest in buying a Russian missile system instead of platforms made by American companies, despite the potential for triggering U.S. sanctions, according to people with first-hand knowledge of a U.S. intelligence assessment.

One of the people, who declined to be named, said that Saudi Arabia, Qatar, Algeria, Morocco, Egypt, Vietnam, and Iraq have all discussed buying the S-400 missile system from Russia. However, the U.S. expects that a handful of countries will fold to diplomatic pressure." CNBC  Nov 14 2018

Yes there are some things you can't do and one of those is promise to buy 15 billion dollars worth of our THAAD systems and then break that promise and purchase a better, cheaper S-400 system instead.

You also can't promise to sell off 2 trillion dollars worth of the Saudi oil business in an IPO and then backtrack on that after all the oligarchs and oil companies got excited about the deal.

Both of these things have happened since March of 2018 and in fact, Khashoggi went "missing" just two days after the Lockheed Martin THAAD deal deadline was failed to be met by MbS.

Military experts have been going on the MSM talking about the pressure we need to put on MbS over this Khashoggi thing and one of the things they say we need to use against the kingdom is our monopoly on the parts and service of the billions of dollars worth of equipment we already sold them.

THAAD doesn't work as well as the S-400 and that is true. But perhaps more importantly, THAAD would require our support to keep it working and there may even be software built into the system that prevents it or could prevent it in the future from being used against our own planes, rockets, missiles and drones.

Which may be yet another reason other nations wish to purchase a different system.

Whatever the case may be... Saudi Arabia going rouge on our masters of the universe is not something that we can tolerate. It screws with the whole "World Island"/"Grand Chessboard" thing they have been working on for 40 years.

Everyone in this country knows King Salman is not going to remove his own son from the line of succession anytime soon. And they also know a direct attack on him like an assassination attempt, would likely fail and even if it succeeded, the chaos that would ensue in the royal family would spread far and wide across the Middle East and no one has any means by which to control the outcome of such turmoil.

Saudi Arabia is heavily invested in many US businesses already, many of which are owned in part by the very same oligarchs folks like Trump, Clinton and Sanders (not to mention the CIA) serve.

And of course there is the whole "controlling the price of oil" thing.

The masters of the universe and their minions in places like the CIA, the Washington Post, the New York Times and CONGRESS are all playing a very dangerous game right now with this Deep Fake Khashoggi story.

But in their eyes the game must be played as the bigger game is being lost one pawn at a time.

Mohamed bin Salman was at one time their golden-boy pawn. He was going to do what our technocrats and their owners could only dream of since London made Saudi Arabia all those decades ago and that is... hand it over, lock, stock and barrel to the real owners of the world.

They have hopes, these globalists do, that after MbS learns the error of his ways, he will return to their warm embrace as the prodigal son returns, hat in hand, willing to humble himself, to atone as a servant for the sin of his vanity and ambition.

This is what they hope for and their means to achieve it is to turn up the political pressure on MbS through sanctions and public relations and in order to do that they need the help of those same institutions mentioned above.

And they need the help of those on the progressive left to get behind their efforts as well.

We live in a world of influence. We are constantly bombarded with propaganda from all sides. This is not new. 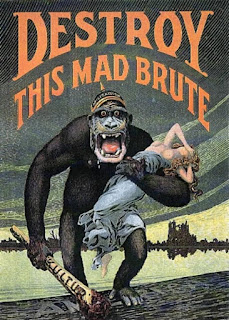 Anyone advocating or advancing such influence must be called out and exposed for doing so. If not, we will find ourselves, soon enough, in a world of complete fabrication. A world where Deep Fakes can no longer be discerned from the hard reality we live in.

Complacency is an incremental disease but it is most certainly progressive. And fatal.

The first step to solving any problem is admitting you have one.

The comfort food Bernie Sanders and his ilk offer is empty and though it may seem more satisfying at the moment as we hunger for something more substantial, in the end, satiated, we still starve as the masters of the universe grow fat on the fruits of our labor.

Sanders has been given a pass in the past. That must not be allowed to continue. He must be called out for his longstanding pattern of betrayal not just to the socialist/progressive values he professes, but more importantly, to those of the very human condition we real progressives hold so dear.

Bernie has proven once again he is no friend of progressive minded people across the world and as such we should be done with him once and for all.

below you will find a list of current congressional actions that betray the supposed efforts to reign in Saudi Arabia's brutal attack on the people of Yemen.

... first one was tabled in the Senate:


"A disparate group of senators — Bernie Sanders (I-VT), Mike Lee (R-UT), and Chris Murphy (D-CT) — drafted and introduced the resolution to stop America’s support for the bloodshed. “This is one of the great humanitarian disasters of our time,” Sanders told Vox in an interview last week.

But the GOP-controlled Senate voted to table — that is, kill — the resolution that says America shouldn’t assist Saudi Arabia in its three-year fight against Iran-backed Houthi rebels in Yemen. By a 55-44 margin, a majority of Republicans and some Democrats effectively said the US can still help Riyadh, by refueling its planes and providing intelligence in the Saudi’s brutal air campaign," VOX Mar. 20, 2018

... then one was shut down in the House:

"Congressional Republicans have used a highly unusual maneuver to stop a debate about US military involvement in Yemen, attaching a one-line rule change to a resolution about wolves.

Republicans won a vote on the procedural ploy in the House of Representatives on Wednesday evening, stopping a resolution aimed at ending US support for the Saudi and Emirati war effort in Yemen, by ensuring it does not go to the floor of the chamber for a debate." GUARDIAN Nov. 14, 2018


... then the Senate voted to keep selling arms to another country that is currently bombing Yemen:


"The Senate on Thursday voted against an effort to block an arms sale to Bahrain — pitched by backers as a means of forcing the island nation to stop participating in the Saudi-led coalition in Yemen.

It was shot down by a majority of senators over concerns it would expose the United States to greater dangers in the Persian Gulf region.