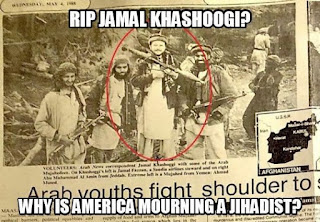 *This is an Urgent Summary Report on the Khashoggi Case. I will be following this up with a detailed article series and video reports at Newsbud. Also, at the bottom this report I have a brief status report for my amazing Newsbud Community Members, explaining my three-month absence.

After 55 days covering the Jamal Khashoggi Case, 24 X 7, on the ground, in Turkey, with over 600 reports and analyses, via my pinned thread @sibeledmonds on Twitter (due to not having access to my computers and being equipped only with one cell phone), I am ready to conclude and publicize my investigative report.

The Khashoggi Case is a massive PsyOp concocted by MI6, CIA and Mossad, with the cooperation and participation of certain high-level Saudi Government intelligence officers.
For the first 53 days of my investigation of this case, while posting reports and analyses via Twitter posts on an almost hourly-basis, I had refrained from a definitive conclusion, partly to protect my sources, but also due to fulfilling the requirement of having documents and at least two direct named (and vetted/legitimate sources).

Yesterday I broke the news on the bombshell revelations by Former Director of the Turkish Military Intelligence Services, General Ismail Hakki Pekin, via Oda TV Live Coverage on Nov 21. See the 6-min video clip below

General Pekin, an insider with a long career in Intelligence who has high-level contacts and sources within MI6, CIA and Mossad, made the following statements (Summary Translation) while risking severe backlash from the government here in Turkey:


There has been intense behind the scenes competition between the UK and US over ARAMCO and it’s coming IPO, scheduled for 2020, via either the London or New York Stock Exchange (Many billions of dollars’ worth)
I’ve been seeking a second legitimate “Named” source for the above information, which I had already gathered weeks prior to General Pekin’s revelations. On November 1, a trustable source, a newspaper editor and investigative journalist with history and expertise in Intelligence matters in Turkey, Ergun Diler, based on multiple high-level Intel sources, leaked explosive informationrevealed by General Pekin with added details and specifics- See translated summary highlights:
From day 5 of the case I’ve been in the position of debunking the mainstream media’s narrative and reports based on researching the case and Khashoggi comprehensively, contacting sources here in Turkey and in the United States, including former and current intelligence and law enforcement experts, insiders, and journalists’ under-pressure here in Turkey. In fact, since day one of this case, unanimously, the media has been feeding the public around the world nothing but false and concocted information.

Khashoggi is/was Not who the mainstream media has been portraying. Right from day one the media published and marketed a false portrayal of this so-called victim, and did so intentionally. Jamal Khashoggi was not a journalist. He contributed less than a handful of fluff opinion pieces for the Washington Post (Of course a newspaper with a long history of CIA partnership). He was Osama Bin Laden’s partner and confidante through out the 80s. He’s been on the CIA team since 1982. In the 90s he worked as a liaison Intel officer for Saudi-CIA cooperation. Starting in the mid-2000s he was an active Arab Spring operative for several NGOs, many of them funded by George Soros and the CIA.  Pretty much everything fed by the media giving Khashoggi and his background almost a saint-like status has been false. Intentionally.

I was the first and only person to debunk the media reports on the alleged Turkish fiancé. Only a few months before coming to Turkey, Khashoggi, while still married in Saudi Arabia, married an Egyptian woman in the US/Canada, with a public and publicized wedding- a sharia wedding. I obtained the pictures of his wedding and his new wife. The media, despite being fully aware of this, omitted this fact from their coverage. How could he meet this alleged Turkish woman and get engaged to her while on honeymoon with this new wife? Then there is the background of this fiancé as an active member of the Muslim Brotherhood, her time in Egypt, and her connections to Soros-Funded Arab Spring NGOs. And let’s not forget her ever-changing story and timeline for the day Khashoggi entered the Saudi consulate. Again, for all the relevant documents, pictures, analyses and timeline on this alleged fiancé please go through my Pinned Khashoggi Thread with 600+ entries.

Instead of detailing all my Khashoggi coverage and making this a lengthy and complex article I am going to direct you to my twitter thread with hundreds of facts and analyses. In the next few days I will begin producing a series of videos talking about the case in depth.
Posted by willyloman at 4:18 PM