I am posting this collection of references to go along with a video I am making. Will add the video after it processes.

A motive for the shooting is still unknown. 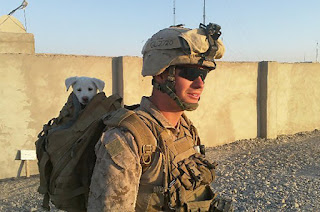 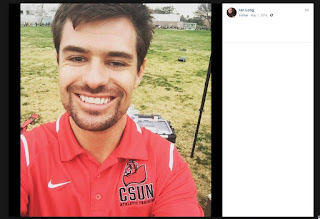 "... Authorities have identified a Facebook post believed to have been made by the shooter around the time of the attack, according to a law enforcement official familiar with the ongoing investigation.
In it, the writer says: "I hope people call me insane... (laughing emojis).. wouldn't that just be a big ball of irony? Yeah.. I'm insane, but the only thing you people do after these shootings is 'hopes and prayers'.. or 'keep you in my thoughts'... every time... and wonder why these keep happening..."
When CNN read the post to a friend of Long's, who did not want to be publicly identified, the friend said, "That does not sound like Ian to me at all. I don't know what was going through his head when he wrote this. It must have been terrible."...

But Long's friends told CNN he was there frequently...


... Borderline, a Western-themed establishment known to regularly host country, salsa and swing dancing nights, was hosting a college country night on Wednesday evening.
"There was a community there. He was a part of that community. The whole bar is line dancing. People do choreographed dances for hours, cowboy boots and hats in the middle of the suburbs of Thousand Oaks," the friend said.
A person who was a friend of Long's until their early 20s and who did not want their name revealed publicly similarly said they used to go to Borderline together. The friend expressed shock that Long could be a killer.
"I don't know what the hell happened. He was always happy. I never thought this would ever come from him. We used to go snowboarding all the time. He was a good guy," the friend said.
A third friend who did not want to be publicly identified said Long stopped communicating two years ago but said the shooting was unlike him.
"He wasn't unhinged, he wasn't violent. He was a sweet guy who served his country and was using his GI Bill to go to college and get a degree to help more people," the friend said. "Out of our group of friends I thought the highest of him." CNN

six off-duty officers in the club

6 off-duty officers were in the bar last night

There were six off-duty officers from various agencies inside the Borderline Bar & Grill at the time of the shooting, Ventura County Sheriff Geoff Dean said.

Dean said a mother recalled that the officers stood in front of her daughter to protect her.

3 minutes of terror: How the Thousand Oaks shooting unfolded 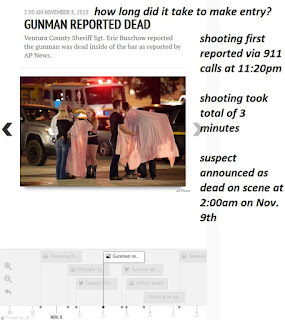 even the "alternative" skeptics buy into the hype 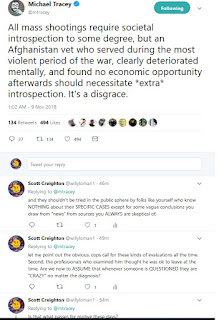 the demands for "gun control NOW!" were instant, loud and reverberated across the social media spectrum as well as the MSM


Orfanos’ mother made a bone-chilling plea to the public during an interview with KABC-TV on Thursday.
“My son was in Las Vegas with a lot of his friends and he came home. He didn’t come home last night,” Susan Orfanos said in tears.
“I don’t want prayers. I don’t want thoughts. I want gun control, and I hope to God nobody else sends me any more prayers.”
“I want gun control. No more guns!” Huffington Post


and here is the exact same type of "gun control" I have been warning about for several years. This is what they call "common sense gun control" and it is yet another huge giveaway to Silicon Valley, our new rulers.

"Legislation arising from tragedies is almost uniformly bad. One need only look at the domestic surveillance growth industry kick started by the Patriot Act to see that fear-based legislation works out very badly for constituents.
A few New York lawmakers are reacting to the horrific Tree of Life synagogue shooting in Pittsburgh, Pennsylvania with a gun control bill that makes zero sense. Expanding on criminal background checks, these legislators are hoping to give law enforcement the opportunity to dig through gun buyers’ online history.

Eric Adams, the president of Brooklyn Borough, and state Senator Kevin Palmer are currently writing the proposed legislation, which would give law enforcement authorities the power to check up to three years of an individual’s social media accounts and internet search history before they are allowed to buy a gun, WCBS Newsradio 880 reported. One of the main aims is to identify any hate speech shared by the users, as the politicians noted that such offensive comments are generally only discovered after mass shootings occur.

The facile explanation for this ridiculous piece of legislation is this: somehow the Pittsburgh shooter might have been prevented from buying a gun because he posted anti-Semitic content to a social media platform.

... It doesn’t take either of those rights into account. It simply says police will now be allowed to view three years of social media history (along with search history from Google, Yahoo, and Bing) to determine gun ownership eligibility." TechDirt

spying on you is useless unless they can use it against you. and how they choose to do that, is by removing your various constitutional rights including the 2nd amendment but also, in order to remove it, they must get rid of the 4th as well. and of course if all of that is based on your online comments and social media posts, then the 1st goes bye-bye as well.

af
Posted by willyloman at 8:38 AM