CIA's Mockingbird,the Washington Post, Cranks Up the Pressure on KSA to Buy THAAD


"In the councils of government, we must guard against the acquisition of unwarranted influence, whether sought or unsought, by the military-industrial complex. The potential for the disastrous rise of misplaced power exists, and will persist." Jan. 17, 1961, President Dwight Eisenhower

Nothing happens in a vacuum. And that is a fact.

The Washington Post has scribbled a new piece of baseless propaganda from the CIA yesterday which was IMMEDIATELY PARROTED by ALL WP assets on social media. It's FAKE NEWS and its being megaphoned just like all the "RussiaGaters" say lies about Killary were back in the lead up to the election of 2016. Of course... Twitter isn't shutting down their accounts (just sayin) 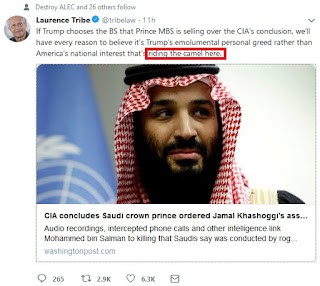 "riding the camel"?!? is that a racial slur from Laurence Tribe? Sure sounds like one. 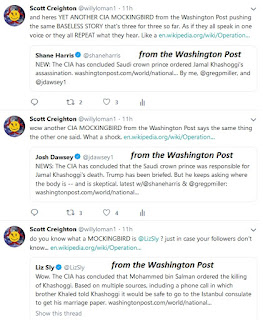 When I saw all this effort and hyperbole coming from the MSM and their various lackeys on social media I figured the Washington Post MUST have come up with something significant on old Mohamed bin Salman (MbS) in order for them to be pushing this hard on it.

So I went and read the article. Imagine my surprise...


"The CIA has concluded that Saudi Crown Prince Mohammed bin Salman ordered the assassination of journalist Jamal Khashoggi in Istanbul last month, contradicting the Saudi government’s claims that he was not involved in the killing, according to people familiar with the matter.

The CIA’s assessment, in which officials have said they have high confidence, is the most definitive to date linking Mohammed to the operation..." WP

You might recall my previous work on the Jan. 6 2017 "17 intelligence agencies" report on Russian "collusion" with the Trump campaign. They had "high confidence" in that one as well.

In a couple days the Mueller investigation will wrap up and we will see how that worked out.

Truth is in that matter, there was no evidence and the "17 agencies" that we were told all agreed with the conclusions actually turned out to be 20 hand-picked guys from 3 different agencies. James Clapper told us the truth about that one... and he would know. After all, he was the hand that picked the 20 guys.


That report was based on "previous reports" meaning the now infamous Grizzly Steppe report that came out in Dec. of 2016 which was shot so full of holes in less than 3 days, even the complicit MSM couldn't mention it's name and it's only mentioned by name ONCE in the Jan. 6 2017 report... in the index.

This new article with this new "high confidence" finding by the CIA (that's what they say when they want to publish a bullshit report without being held to account later when it turns out to be completely bullshit. They don't want to say "they definitely have weapons of mass destruction" because later, when it turns out they didn't have weapons of mass destruction, they could lose their jobs... or... more importantly... the American people could lose confidence in their glorious institutions... so instead they couch their bullshit claims behind the conclusion that they have "high confidence" in the lie. Cute huh?) is entire baseless and reported as if it were a throwback to 2002 run-up to the Iraq invasion.

One claim they make is quite stupid. They say MbS's brother, the ambassador to the US, called Khashoggi to get him to go over to Turkey to pick up some random papers (which I guess can't be faxed?!?) but... here's the trick...

" It is not clear if Khalid knew that Khashoggi would be killed, but he made the call at his brother’s direction, according to the people familiar with the call, which was intercepted by U.S. intelligence." WP

However, I guess due to the Washington Post's legal team, they also included this little gem.


"Fatimah Baeshen, a spokeswoman for the Saudi Embassy in Washington, said the ambassador and Khashoggi never discussed “anything related to going to Turkey.” She added that the claims in the CIA’s “purported assessment are false. We have and continue to hear various theories without seeing the primary basis for these speculations.” WP

That's an actual source, someone going on the record, saying what she knows to be factual. Do you see the difference there?

This entire new report is entirely baseless unless you consider the word of secret sources and rumors of recordings to be evidence. If that is the case, don't become a lawyer because I have news for you, they aren't.

They repeat the claim that Turkey gave the CIA a recording of the murder, yet, like the recording of the phone call between Khashoggi and MbS' brother, they don't bother releasing it. I suppose it's still in post production.

Remember the story about how they got the recording? They claimed at first they could hear the murderers trying to figure out how to turn off Khashoggi's I-watch recording mode and they eventually used his fingerprint to access it.

Turns out I-watches don't have that feature so that story had to go.

Now they claim the recording came from Turkey bugging the entire Saudi embassy.

"Among the intelligence assembled by the CIA is an audio recording from a listening device that the Turks placed inside the Saudi consulate, according to the people familiar with the matter" WP


Do you remember the story about his body being found in a well on the actual property of the consulate general? Turns out that story is down the memory hole as well (pardon the pun)

"The president has also asked CIA and State Department officials where Khashoggi’s body is and has grown frustrated that they have not been able to provide an answer. The CIA does not know the location of Khashoggi’s remains, according to the people familiar with the agency’s assessment" WP

Now they claim they have heard the recordings and decided MbS MUST be guilty because... nothing happens in the KSA without his say-so.

"The CIA’s conclusion about Mohammed’s role was also based on the agency’s assessment of the prince as the country’s de facto ruler who oversees even minor affairs in the kingdom. “The accepted position is that there is no way this happened without him being aware or involved,” said a U.S. official familiar with the CIA’s conclusions." WP

This "report" from the CIA is total bunk. It's meaningless except for one little passage in which they give away the real plot of the story.


"The CIA sees Mohammed as a “good technocrat,” the U.S. official said, but also as volatile and arrogant, someone who “goes from zero to 60, doesn’t seem to understand that there are some things you can’t do.” WP

Yes. MbS was a good technocrat meaning he was a good puppet making ready to neoliberalize the whole of Saudi Arabia and make a bunch of the CIA's favorite folks a shit-ton of money. But... a funny thing happened on the way to the state oil company's 2 trillion dollar IPO... it didn't happen.

MbS also didn't make that 15 billion dollar deal with Lockheed Martin for the THAAD missile systems like he promised.

And then... MbS started talking the Russians about a little system called the S-400 and the CIA and other neoliberal globalists decided "there are some things you can't do" when you are OUR PUPPET.

"At least 13 countries have expressed interest in buying a Russian missile system instead of platforms made by American companies, despite the potential for triggering U.S. sanctions, according to people with first-hand knowledge of a U.S. intelligence assessment.

One of the people, who declined to be named, said that Saudi Arabia, Qatar, Algeria, Morocco, Egypt, Vietnam, and Iraq have all discussed buying the S-400 missile system from Russia. However, the U.S. expects that a handful of countries will fold to diplomatic pressure." CNBC

"In terms of capability, one source noted that while there is no perfect weapon, the S-400 eclipses even THAAD, America's missile defense crown jewel.

"No other U.S. system can match the S-400's ability to protect large swathes of airspace at such long ranges," said the source, who was not authorized to speak publicly.

The S-400 can target high-altitude and high-value targets like stealth bombers, aircraft, cruise missiles, precision guided munitions and some tactical ballistic missiles, the source added. The Russian-made system is also capable of defending against a swarm drone attack which was used by Houthi rebels to destroy a UAE Army Patriot battery in February." CNBC

In a nutshell, the CIA (Capitalism's Invisible Army) fights for our "national interests" overseas (and now here at home since NDAA 2012) which translates to "they fight for the profit margins of our major MIC, US Chamber of Commerce and banking interests" and in this case they are doing exactly what they always have done.

Did you notice that little quote above that I didn't highlight? Did you see that? Let me remind you.

"However, the U.S. expects that a handful of countries will fold to diplomatic pressure." CNBC

And the BS baseless story from the CIA and their Mockingbird outlet the Washington Post (CIA gave Amazon $600 million contract around same time Bezos bought Washington Post for $250 million)... when was that published?


"However, the U.S. expects that a handful of countries will fold to diplomatic pressure." CNBC

" (MbS) doesn’t seem to understand that there are some things you can’t do.” WP

Nothing happens in a vacuum. This is weaponized communication from the Washington Post on behalf of a MIC asset and the overall neoliberalization process that seems to have been halted in Saudi Arabia.

The kingdom represents a special problem for if they back out of deals like this, like THAAD, like austerity, like opening up their markets to our hot money speculators... then we can expect an avalanche of similar choices being made by other puppet regimes suddenly emboldened to tell our oligarchs to take a flying leap.

Like the spread of democracy in Latin America back in the 70s and 80s... some things simply can't be allowed.

Someone once warned us about this. His voice echos someplace in the backs of all of our minds.


"In the councils of government, we must guard against the acquisition of unwarranted influence, whether sought or unsought, by the military-industrial complex. The potential for the disastrous rise of misplaced power exists, and will persist." Jan. 17, 1961, President Dwight Eisenhower