from Moon of Alabama

The person(s) who first published documents of the shady UK organization Integrity Initiative decided that the discussion is about the Initiative is not yet sufficient and published more documents.

The first dump on the Cyberguerilla site happened on November 5. We discussed it here. A smaller dump on November 29 revealed more about the UK government paid Integrity Initiatives influence work in Germany, Spain and Greece. A third dump followed today.

The leaker, who uses the widely abused Anonymous label, promises to publish more...

The most interesting paper I found so far is: 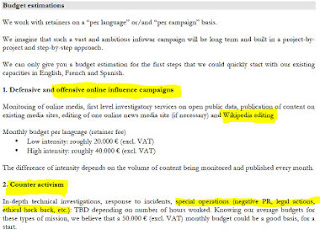 ... But as we saw in the information revealed yesterday there is more to it. The Initiative, which has lots of 'former' military and intelligence people among its staff, is targeting the political left in Britain as well as in other countries. It is there where it becomes a danger to the democratic societies of Europe.