The U.S. Stunt In Hong Kong Will Make Other Issues More Difficult

from Moon of Alabama

The current attempt of a U.S. instigated color revolution in Hong Kong is failing:


Protesters wearing all black streamed through the Yuen Long area, even though police refused to grant permission for the march, citing risks of confrontations between demonstrators and local residents. By nightfall, protesters and police were once again facing off in the streets, as they've done previously during the summer-long pro-democracy protests in the Chinese territory. Demonstrators threw objects and ducked behind makeshift shields, and police officers shot plumes of tear gas into the air.


In May the chief organizer of the demonstrations met with U.S. leaders:


U.S. Secretary of State Mike Pompeo met with Hong Kong pro-democracy leader Martin Lee on Thursday, the State Department said, as Hong Kong activists seek to derail a proposed extradition law pushed by Beijing. “Secretary Pompeo expressed concern about the Hong Kong government’s proposed amendments to the Fugitive Ordinance law, which threaten Hong Kong’s rule of law,” the department said in a statement.
Lee founded the first pro-democracy party in Hong Kong in 1990 and has been a prominent voice calling for civil liberties for the city’s residents.


Lee and other U.S. stooges organized large demonstrations against an extradition bill which would allow the government to send people who committed crimes in mainland China, Taiwan and Macau to those provinces where the crime was committed to receive their punishment. Hong Kong already has similar agreements with foreign countries.


Since then the government of Hong Kong temporarily pulled the bill back. The protest movement immediately diminished. But a core of black-clad students, influenced by the U.S. paid leaders, is trying to keep the struggle up. Throughout the last weeks they broke into the parliament building and ransacked it. They defiled family graves or pro-Chinese politicians, attacked police lines, harassed elderly arrivals (vid) at Hong Kong's airport and today, during an illegal demonstration, destroyed a car which they falsely believed to have a Chinese mainland owner. Their aims are clearly unachievable and racist nonsense:

Carl Zha @CarlZha - 18:59 UTC · Jul 26, 2019
A Hong Kong protester besiege the old man at Hong Kong Airport helpfully hold up sign “Hong Kong Revolution, Chinese NOT Welcome, Taiwan Independence, Kick Out All Chinese”
Just in case you are not clear what the protest is about 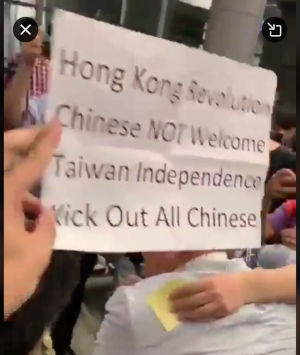 Such behavior and slogans will only diminish the popular support they might have received otherwise.

That the U.S. is behind these riots can also be seen in the slanted coverage the riots receive in 'western' media. The picture they draw is incomplete:


Unable to defeat the bill legislatively, Hong Kong's pro-Western opposition has taken to the streets. With the help of Western media spin - the illusion of popular opposition to the extradition bill and Beijing's growing influence over Hong Kong is created. What is not only omitted - but actively denied - is the fact that the opposition's core leaders, parties, organizations, and media operations are all tied directly to Washington DC via the National Endowment for Democracy (NED) and corporate foundations like Open Society Foundation.


Hong Kong has 7.5 million inhabitants. While demonstrations of several ten thousands seems big, they does not represent a majority. The so called 'pro-democracy' parties in Hong Kong have lost in each and every local election. The pro-China parties always receive a majority of votes...

[read more here]
Posted by willyloman at 6:10 AM