It's being called a "miracle" and I guess when "God's chosen people" start talking about miracles like this one, they take that kind of thing very seriously.

The story goes something like this: a bus full of IDF soldiers got hit by a Kornet antitank missile (see here, here and here), fired from Gaza but it had unloaded all the soldiers minutes before the strike.

"The soldier who was injured was apparently standing outside the bus when the Kornet anti-tank guided missile was fired from the Gaza Strip." Times of Israel 11/13/18

"Moments later, the bus, which had no markings identifying it as military, pulled out into the open and was immediately struck by a Kornet anti-tank missile." The Yeshiva World 11/13/18


They are reporting there was only one casualty, a 19-year-old IDF solder who was taken to the hospital.

Most reports fail to mention the Arab-Israeli bus driver... who was also taken to the hospital suffering from "shock"

And, as it just so happens, they had a camera pointed right at the bus far enough away to not be in danger, just as the explosion happened.

The claim is it was Hamas who made the video. Funny, there is no fence between the camera and the bus and it zooms in quite close during the recording.

And a you had a bunch of troops standing nearby behind SUVs... luckily on the right side of the vehicles so that they were shielded from the explosion.

And... route 232, the location of the event, was closed to civilian traffic that day.

Whatever caused the explosion after everyone had gotten off the bus, it was not a Kornet anti-tank missile and in fact it looks as if something was planted on the bus itself.


The IDF posted a notice of the attack immediately on social media outlets and it is serving as justification for them blowing up more and more Palestinian homes in Gaza. In the comments below were the typical calls for violence you might expect. Of course, Twitter doesn't seem to be blocking or taking them down. Funny how that works. 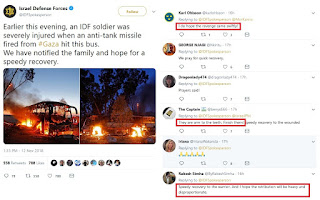 The event took place near Kibbutz Kfar Azza a couple thousand meters from Gaza and right off route 232. They claim it was Russian Kornet anti-tank missile that was used. 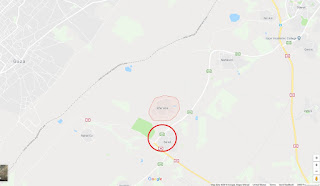 In the video you see a bus slowly coming around a corner giving a nice broadside target to the camera. As it turns the corner, for a brief moment, you can see the door is open on the passenger side. It makes a right turn and seems to slow even more just before the explosion. 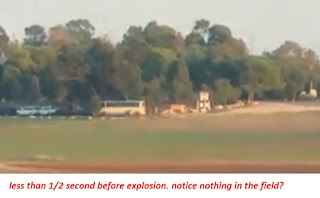 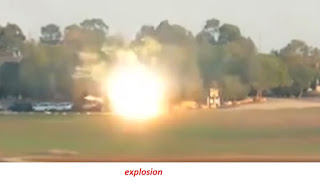 Here is a video of the event. It starts at :30 seconds in. Watch real closely the field between where the missile supposedly comes from and the bus. Also listen. You can here a missile launch but you never see one.

Now watch these. These are two videos of the Russian made Kornet anti-tank missile system in operation. They are slow-moving, large rockets that are guided. Notice that you can see the missiles clearly on a bright day flying toward the target.


In this one you can see the smoke trail from the rocket as it flies toward the target.


In this one "ISIS" fires a Kornet anti-tank missile in Iraq at an actual tank.


You can CLEARLY see the missile and it's exhaust trail as it weaves its way to the target.

Now go back and watch the video again and listen for the sound of the rocket firing. Listen as it supposedly gets close to the bus. There is NOTHING crossing the field. 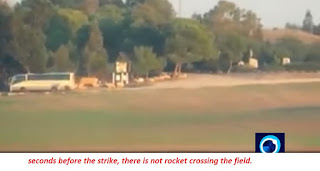 That means the sound effect is added either in post-production or, more likely, by someone playing a recording of the sound on a speaker near the camera.

Based on the fact that the driver only suffered from "shock" he either got out just before the explosion or... the explosion took place in the read cargo area of the bus. 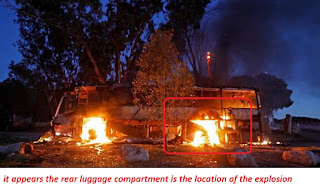 Whatever caused the explosion, the IDF supposedly knew it was going to happen BEFORE it happened.


IDF commanders were reportedly aware that Hamas was going to target a bus or train, and that is why train service between Ashkelon and Sderot was halted, as there is an area in which the train would be exposed to a Hamas strike. This is also the reason why Route 232, which hugs the Gaza border, was closed to civilian traffic on Monday." The Yeshiva World

And the story about Hamas now using Kornet missiles is also important to the Israeli cause in that everyone already knows the bottle-rockets they use are basically harmless. The Kornet cranks up the danger factor considerably.

" It is also reported that Hamas is using Coronet rockets, as is used by Hezbollah in the north, signifying a significant improvement in the terrorist army’s ability to strike further, harder and faster; as these rockets are traveling significantly faster than the primitive rockets used in the past." The Yeshiva World


This event has "war by deception" written all over it. Israel needed a clear justification to launch the attack their leaders have been planning for some time.

Whatever caused that explosion, that "miraculously" did not happen when it was full of IDF soldiers, it wasn't a Kornet anti-tank missile. That's for sure.

Posted by willyloman at 8:23 AM