(Every year it seems we see another film which strongly implies government collusion with the narcotics industry. Sicario exposes the CIA's connection to  the Colombian Medellin cartel and how they supposedly work with the DEA and other agencies to make winners and losers in the illegal narcotics industry. This year White Boy Rick features a story about a illegal weapon's dealer's son who ends up being a undercover Fed who starts running cocaine in the 80s. Freeway Ricky Ross was an asset of the CIA back in the Iran Contra days. In the film Kill the Messenger he had a small role being interviewed as a key witness of Gary Webb's. Back in 2007 Denzel Washington played the part of Frank Lucas in American Gangster. Lucas was bringing in heroin from the Golden Triangle during the Vietnam War getting people addicted to it on the east coast for years. His pipeline was via the US military. The film tried to pretend an operation that big could go unnoticed by the Army all that time, but you know damn well that was a farce and Lucas was simply their front-man. Whether it was heroin in the 60s and 70s or crack in the 80s and 90s or meth at the turn of the century (even had a TV show glorifying it) or pills from Big Pharma or more heroin again now from Afghanistan that our soldiers protect... it damn sure seems like an orchestrated operation to me. And this study shows just how successful it has been all this time. Steady growth in these numbers do not imply a random occurrence. This is a growing trend. And one that seems to be supported by certain aspects of government. SC) 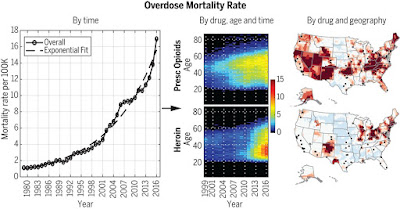 A new study has just been published in Science.Org magazine detailing the progression of addiction in the United States from 1979 to 2016.

Named "Changing dynamics of the drug overdose epidemic in the United States from 1979 through 2016," it records the deaths from 600,000 overdoses during that 38-year period.

Even more alarming: Even if, for example, the current opioid crises begins to be dealt with, the trajectory is such that deaths from that same drug would not lessen.

Indeed, more than 70,000 died from overdoses in 2017, and nearly 70% of those are were from heroin, opioids, and fentanyl, according to the Centers for Disease Control and Prevention...