The Tale of Two Benghazi Reports: The Shillin for Killary Never Ends

The shillin for Killary Clinton never ends. “So let’s make her president” says the fascist arm of the New Dem “left”

When Rep. Elijah Cummings wasn’t sitting on the floor in congress fighting for the New Dems’  fascist “no buy no fly” secret list building legislation that strips citizens of their constitutional rights via secret evidence considered by arbitrary panels in the “Justice” Department, he was sitting on his fat ass in the House Select Committee on Benghazi as the leading member of the minority party and therefore the Chief White-washer and Brand Defender of his presidential choice, darling champion of the working man, Hillary Clinton. 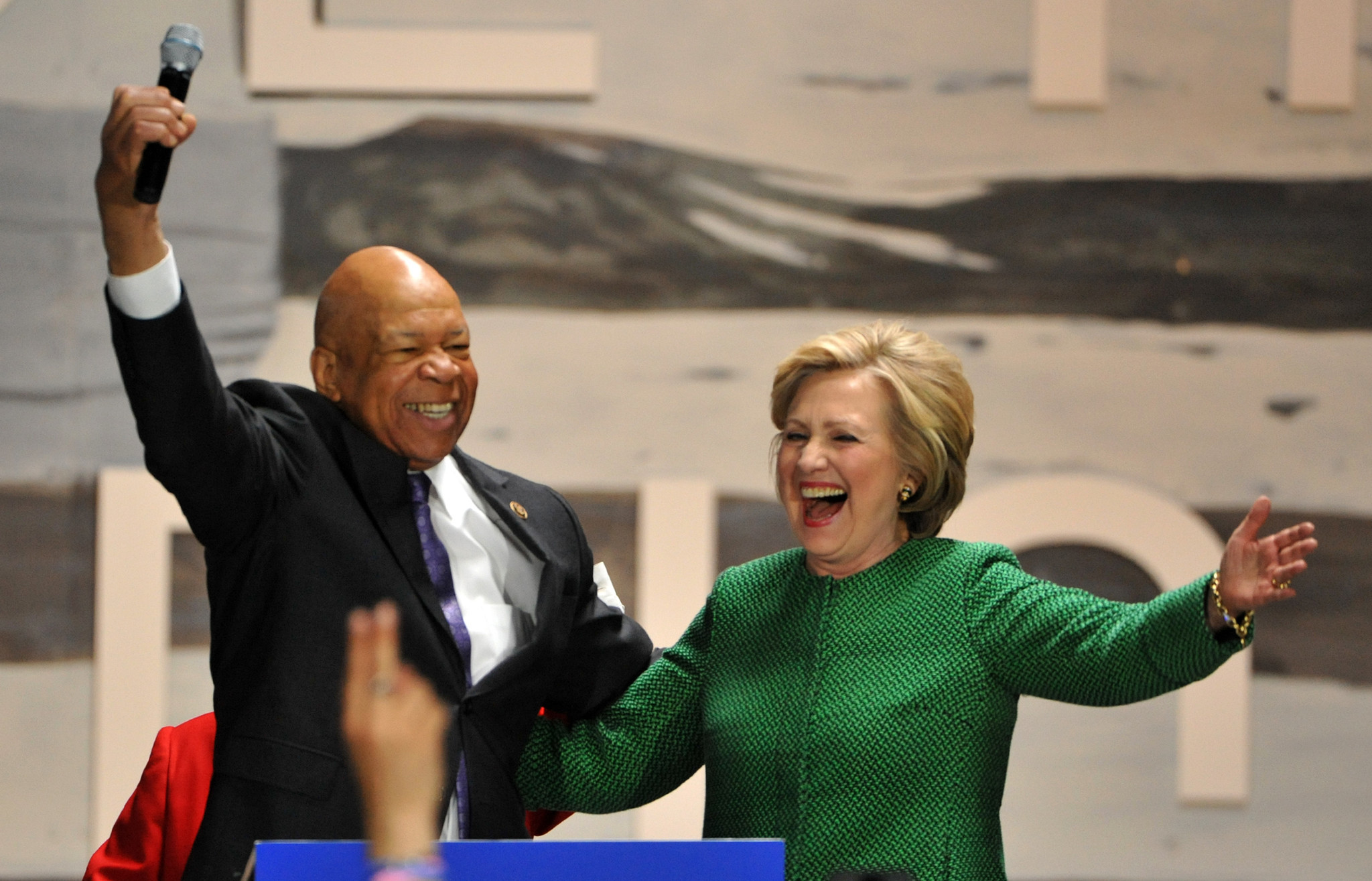 The republicans of the Select Committee announced they were finally going to release the results of their two year study today, Tuesday, June 28th.

So to offset the effects of that release, sycophant to power Elijah Cummings released the “minority report” from the Democrats late yesterday, which though unofficial, promises to provide enough covering energy for Killary long enough to distract those who wish to be distracted until this new Killary Crime blows over.

Though Elijah says the republican version is nothing more than “partisan politics”, his report is packed full of partisan headings like these:
Aside from the fact that there are literally piles of evidence which suggest Rep. Cummings and anyone else who prepared this minority report are lying through their teeth about much of these statements, fact is, we wont really know how much evidence there SHOULD BE because the criminal and neoliberal war-monger Hillary Clinton ERASED 30,000 OFFICIAL STATE DEPARTMENT EMAILS before turning over a carefully screened selection of what she said were “all” of them.


That being said about the Cummings/New Dem cover-up for the fascist Clinton State Department days, there are already tid-bits from the Republican version of the commission findings making their way to the public domain already and the picture they paint, though not vastly different than the white-wash presented by their opposition, is still quite damning in it’s own right.


I guess we can finally write-off as pure CIA/Hollywood propaganda that new movie that paints the US military as the great heroes of this story.


“One section of the report seems to allege that U.S. officials fundamentally misunderstood who their allies were at the time. The Republican majority’s report found that 35 Americans were saved not by a “quasi-governmental militia” as previous reports concluded, or even a group the U.S. saw as allies. Instead, the report determines that the Americans were saved by the “Libyan Military Intelligence,” a group composed of military officers under the Moammar Khaddafy regime, the Libyan dictator who the U.S. helped topple just one year earlier. ” NBC News


Can you imagine that movie? Instead of our hero warriors defying confusion and bureaucracy to run to the aid of Americans in need, they were actually rescued by members of the government we bombed out of existence on behalf of British and French business interests. That’s a movie right there, right? Of course, not one CIAwood cares to make.

But it is true and even the war-mongering republicans had to admit it.


“The February 17 Martyr Brigade, “recommended by the (new) Libyan Government (we put in place) and contractually obligated to provide security to the Mission Compound,” had fled, the report found. “In other words, some of the very individuals the United States helped remove from power during the Libyan revolution were the only Libyans that came to the assistance of the United States on the night of the Benghazi attacks,” the report states. ” NBC News


Those would be the same folks who retook control of Libya in the subsequent years and the same folks we are now bombing so our new “coalition government”, the people who turned their backs on us and fled, can retake power. Cute huh?

Truth is, the Benghazi attack was staged. We had the FBI hand over the “Innocence of bin Laden” video, made by an FBI asset as a honey-pot trap for L.A. “extremists” (which failed miserably) and then it was released on Youtube the day before the attack so it could be used as the presumptive motivation for the attack, when in fact it had nothing to do with it, despite the politicized talking points coming out of Hillary Clinton’s State Department for a week after the event.

The administration needed a justification to reengage with Libya and the whole of the continent of Africa and what better way to do it than a staged “attack” on our assets in Libya complete with professional photographers and dramatic emotion-inducing “money-shots”. GO “MERIKA!!!

And we can certainly do away with the bullshit of that propaganda movie:


“…and the lengthy delay that prevented the military assets from arriving at the embassy in Tripoli until 2 p.m. the day after the Benghazi attack.
“What was disturbing from the evidence the Committee found was that at the time of the final lethal attack at the Annex, no asset ordered deployed by the Secretary had even left the ground,” the report states…
But the report states conflicting orders from State Department and Pentagon officials over whether Marines should wear military uniforms or civilian attire also played a role…
According to one commander, the report states, as forces prepared to deploy, “during the course of three hours, he and his Marines changed in and out of their uniforms four times.” NBC News


A three hour delay as shots were being fired in Benghazi over what the extraction team would wear? That’s in the report.

Then they say the plan was too send the closest available assets to Tripoli, not Benghazi. So it seems to me someone was deliberately delaying the departure of our guys and then trying to send them somewhere other than where the action was. Does that remind anyone of the fighter jets on 9/11 being sent out over the Atlantic ocean rather than directly to Washington or New York to defend the skies? It should, because it’s an order cut from the same cloth.


“Further, several witnesses told the committee that despite Panetta’s orders, the operating plan was not to insert any asset into Benghazi. “Their understanding was that the assets needed to be sent to Tripoli to augment security at the Embassy, and that the State Department was working to move the State Department personnel from Benghazi to Tripoli.” NBC News


You want another 9/11 flashback moment? Here’s one. The committee ultimately concluded that confusion and miscommunication between agencies were ultimately to blame.


“The section of the report devoted to the Benghazi assault concludes “the response to the attacks suffered from confusion and miscommunication circulating between agencies.” NBC News


I mean that is like plagiarism of the 9/11 Commission (Omission) Report. Someone should sue them.
The Clinton campaign is already hard at work framing this report as just another in a long line of “republican attacks” on the humanist that is Queen Hillary the First.

I wont be able to fully review the report until it is officially release sometime this evening. When it comes out I will add a link to it in the updates.

It is absolutely fascinating the lengths they will go through to defend fascist criminals like Hillary Clinton in the New Dem party of corporatist globalists. We can expect Miss Blazer and Pants-suit Elizabeth “Sellout” Warren to jump to her aid anytime now. Her and Poutface Cummings will be shillin like there’s no tomorrow for their gravy-train candidate who leaves bodies in her wake like a pack of IMF technocrats in Greece.

I’ve covered the Benghazi psyop til I’m blue in the face and don’t look forward to having to reopen that old wound, but I will read and evaluate the republican version of the report when it’s released.
Posted by willyloman at 5:34 AM