The n00b-Agent Chemical Weapons Story Out of Salisbury is Pathetic, Simple-Minded Propaganda


“The name novichok is Russian for “newcomer”, “beginner”, “rookie” or “newbie”(or “nOOb“).” Wikipedia
“Newbs are those who are new to some task* and are very beginner at it, possibly a little overconfident about it, but they are willing to learn and fix their errors to move out of that stage. n00bs, on the other hand, know little and have no will to learn any more. They expect people to do the work for them” Urban Dictionary “nOOb”


This goes to MOTIVE

Britain has been using Wahhabist terrorists to create nation states ever since they used them to help create Saudi Arabia, one of the most backwards, brutal, repressive and dictatorial countries on the planet (see here , here and here). And also one of the richest.

Currently Britain is involved in used these same mercenary terrorists to try to force a regime change in Syria and to break off a piece of that country (about 40%) in order to give it to the Kurds for their Greater Kurdistan project, which would create another (House of) Saud(i) Arabia potentially named (House of) Barzani(i) Kurdistan (about equal parts of Syria, Iraq, Turkey and Iran must be offered up for this “New Middle East” project… against the wills of the interested parties of course)

But the Russians helped the government and the people of Syria thwart these operations as they stand in opposition to this British/U.S. endgame gambit on the Grand Chessboard that is the Middle East today.


Also of note, Britain also had a vested interest (to the tune of 10 billion dollars paid by Royal Dutch Shell) in the forced regime change in Ukraine (see this, this and certainly this). They got thwarted there as well by the will of the people of Donetsk, Luhansk and Crimea… and Russia supported their move toward independence. The U.S. also had an interest in that region:
(side note: I noticed two videos “Ukraine on Fire” and “Ukrainian crisis news. War in Ukraine, Europe, Russia, Donbass, USA ” have been scrubbed from Youtube in the latest purge of theirs. I also heard Youtube is going to start inserting text into people’s videos when their censors decide something is said in the video that might be a little “off” from the OFFICIALLY SANCTIONED RIGHT-THINK. Talk about deliberately killing your own creation)

Apparently the dreaded Russians are becoming quite the bee in the bonnet of the Empire upon which the sun never sets.

Of course the Russians have no motive and like all apologists for such baseless accusations when folks say “wait there is no motive”, they always reply “Putin wanted to send a message” and that ridiculous crap suddenly becomes proof in and of itself. Believe it or not.


The Crime of the nOOb-Agent Attack

So it should come as no surprise to learn that British Prime Minster Theresa May just accused the Russian government of using a “chemical weapon” in Salisbury to attack some retired former double agent named Segeri Skripal… for no apparent reason.

The claim revolves around the purported use of something called a “novichok” chemical weapon. Novichok, as you can see above, translates roughly to “newcomer”, “beginner”, “rookie” or “newbie” in Russian. I added the current equivalent, “nOOb” to that list for reasons you will soon understand.
According to the stories, a Russian defector came over to the U.S. back in the late 80s and told our Reagan/Bush administration that he personally had proof the dreaded Rooskies were secretly crafting a deadly nerve agent that was so super secret and so super deadly no one dared even give it a real name in Russia. They just called it “new stuff” basically.

Of course, you have to remember, back then they were in the process of setting up a new accord on the use and manufacture of chemical weapons (1992) so it served our interests to have “proof” Russia was already lying. This defector, Vil Mirzayanov  now lives in a comfortable million dollar home here in the U.S. and his story, as explained at Moon of Alabama, is pretty ridiculous. In fact it’s so ridiculous, this nOOb agent of Death may not even exist:


“The British government claims that ‘Novichok’ poisons, developed 30 years ago in the Soviet Union, affected a British double agent. But such substances may not exist at all. The British government further says that the Russian government is responsible for the incident and has announced penalties against the country…

The ‘whistle-blower’ who revealed the ‘Novichok’ program and its poisons published chemical formulas that should enable any decent laboratory to reproduce them. But neither the existence of the claimed program nor the existence of the alleged substances were ever accepted by the scientific community.

There is no independent evaluation of the alleged poison. The British government claims that its own chemical weapon laboratory at Porton Down, only a few miles from where the incident happened, has identified the poison as one of the ‘Novichok’ chemicals.
But in 2016 a leading chemist at Porton Down had doubts that such chemicals exist. (Tim Hayword and Craig Murray both point this out):” Moon of Alabama


Yes that is right. The location where the alleged attack took place is only a hop-skip and a jump from Britain’s own chemical weapons manufacturing facility, Porton Downs. And to date, the Brits have flat out REFUSED to allow ANYONE to view any of the scientific evidence associated with this attack.

MoA rightly reminds his readers of the AmeriThrax attacks back in 2001 that were immediately blamed on Saddam Hussein… but it turned out the anthrax came from our own military stockpiles of the stuff. Some poor slob was then blamed and he “killed himself” with some Tylenol before a real investigation could be undertaken. End of story. Nothing too see here. Move along.
Theresa May said this yesterday:


“Either this was a direct action by the Russian state against our country, or the Russian government lost control of its potentially catastrophically damaging nerve agent and allowed it to get into the hands of others.”

And oh, by the way, she kicked out a bunch of Russian diplomats after saying that.
Yeah well except… remember the new millionaire who told us all about that nOOb-agent Russia made (by the way, it was supposedly made in the facility he worked in, which was in Uzbekistan not Russia and the U.S, inspected it and gave it a clean bill of health)? Turns out he wrote a book in 2008 and in that book… he included the formula for the nOOb-agent.. just in case someone with $8.50 wanted to learn how to make it


“Russia did it”, says Mirzanyanov, “OR SOMEONE WHO READ MY BOOK”.
The book was published in 2008 and is available as hardcover, paperback or for $8.16 as an electronic file. It includes a number of formulas which, Mirzanyanov says, could be used to produce those chemical agents. But neither Porton Down nor the OPCW seem convinced that this is possible. They may believe that Mirzanyanov is just full of it.” Moon of Alabama


Yep. That’s right. The book was published in 2008 and in it there is a formula for making the nOOb-agent. So I guess Theresa simply forgot that OTHER potential possibility: some other nation state with a spare 10 bucks could have bought the book and made some themselves.
I wonder how that slipped her mind.

And the location of the attack was where? A stone’s throw from Theresa’s chemical weapons production facility? Right?

Understandably the Russians (and the French and Jeremy Corbyn by the way) are saying “WTF?!?” in the UN Security Council as Britain’s lying smarmy representative and Nikki Haley sat there practically holding up glass vials of nondescript white power ala Colin Powell (probably her dwindling cocaine supply) screeching about the UNSC “doing something” before MORE ATTACKS take place.

The underlying threat there (the one they both know was well received by folks capable of reading between the lines) is that “someone” will conduct MORE CHEMICAL WEAPONS ATTACKS on innocent civilians until the council gives in and kicks Russia off the council so the U.S. can better use it as a weapon against anyone who refuses to submit to the will of our “national interests”
And with Russia off the Security Council, it would certainly be a lot easier to try to fix those little problems Britain has in Barzani Kurdistan and Ukraine, would it not?

Russia’s official statement on this at the USC sounds reasonable:


“Let me repeat. Russia had nothing to do with this incident. The British ultimatum isn’t worthy of our attention and is null and void,” he said. “We trust they will provide samples of the substances for examination for a joint investigation. This is not optional, this is a mandatory requirement. We have nothing to fear and nothing to hide.”…
“We demand material proof of the alleged Russian nerve agent traces from this event,” he said. “Merely stating that there is incontrovertible proof is unacceptable. An independent analysis would be more appropriate.”..
“For the British specialists to be perfectly confident that this was a Novichok agent and not any other kind, they would need a control standard for proof. It [the substance used in the attack] must be compared to a control substance,” Nebenzya stated. “They have a collection and they have the formula. In other words, if the UK is so firmly convinced this is Novichok, they have samples and formula and are capable of formulating it themselves.”
“It is no longer necessary to show the Council test tubes with white substances. It is enough to send letters with egregious accusations,” he said.” RT


Britain and the U.S. sat in the UNSC yesterday and basically did a homage to Blazing Saddles when they essentially warned of more terrorism being leveled on their own people (Nikki Haley mentioned New York of course) if something isn’t done to hurt Russia. 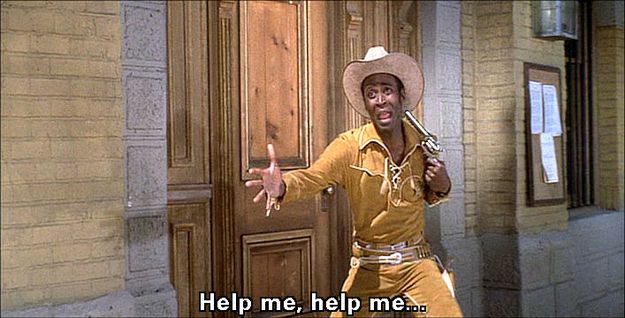 The complicit media are running with the story, as all good minions will surely repeat the accusations of master without question, thought or concern. It doesn’t matter how stupid they sound giving voice to this propaganda. They are, after all, nothing more than PR outlets for the dictates that must never be questioned.

I guess it’s not by coincidence that this latest SLAPP attack on independent journalism was launched earlier this week right before this clown-show of a campaign took off.
Posted by willyloman at 10:32 AM