(I have also added a link to the archived version of this article here)
***UPDATE*** At the end of this article, I have added a plan view layout and cross-section of what I hypothesize as the potential det cord layout plan for a typical WTC floor.  Scott has asked how the cord may have been used, so I thought I would include the drawings.
————–
In yesterdays article titled “The 23,000 Missing Trusses of 9/11“, I questioned why it is that I can’t seem to find one single truss (of the 23,300+ of them from the Twin Towers) in all the photos of the debris and the clean-up process at Ground Zero.  I went further and hypothesized that the missing trusses may in fact be the mysterious “tons of iron-rich (read as “steel”) spheres” that Jones and others have found.  It would seem a logical assumption.
As odd as their absence from the debris field is, when you understand how these truss sections were fabricated and installed, it makes the story of the missing trusses an even greater mystery.  And perhaps an even bigger clue.
The 6,000
High above the Manhattan skyline, in the early 70’s, over 6,000 of these prefabricated floor sections were hoisted by construction cranes and then set into place by union steel workers fabricating the World Trade Centers.   On Sept. 11th 2001, according to the official record of that day, they simply fell and in so doing, disappeared into the history books as if they never existed.

I for one, would like to know how that is possible.
They were fabricated elsewhere and lifted and set in place by the construction cranes, as pictured.
Some consisted of 3 trusses but most were made up of 4.
18′ wide by 60′ long, they were welded together along with the transverse mounted trusses (3 Bridging Trusses you can see in the picture) and the corrugated metal floor pans that the concrete for the floors was poured on top of.

“Two or more beams will be preassembled with steel decking and erected as a unit, to save erection time...”  Engineering News Record

“Clear span of the floorbeams is as much as 60 ft. They will be fabricated of high-strength low-alloy steels.”  Engineering News Record
“Their (HSLA steels) yield strengths can be anywhere between 250–590 megapascals (36,000–86,000 psi). Due to their higher strength and toughness HSLA steels usually require 25 to 30% more power to form, as compared to carbon steels.”   Wiki

So in fact, the trusses themselves were made of stronger and harder metal than the columns were.
We know that the floors were brought in an set in place in sections, not just because the article from Engineering News Record says so, but also because we have photographic evidence that supports the claim. 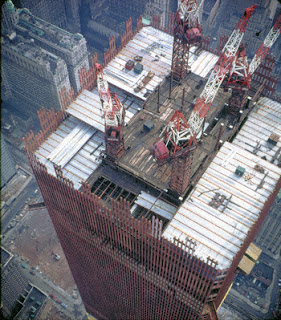 In the photograph above, you can clearly see the floor sections are being set in place and one of them is laying on the lower floor (left side) waiting to be lifted installed.
From this other photo, we can see the same process. 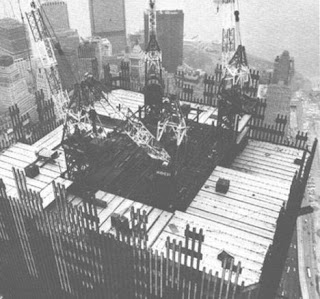 When they were lowered into place as a prefabricated unit, they were bolted then welded to both the interior core columns and the exterior columns at the spandrels.
Then the next section would be brought in and it would then be bolted and welded in the same manner, but also then welded to the previous floor section at the floor pan and the transverse mounted trusses. 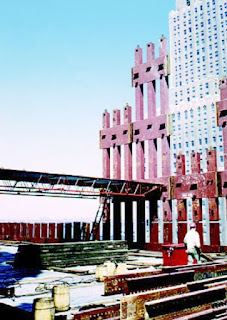 The end result, per floor, would look something like this prior to the pouring of the concrete floor. 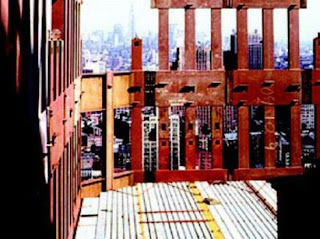 Now why is all of this important?
According to the official explanation of the collapse of these two buildings, the upper section fell down on the lower, intact building, crushing the concrete into dust, and destroying the structural integrity of the building.
But no amount of pressure that could possibly have been generated by the upper block, or “piston”, can explain the virtual disappearance of the floor systems you are now looking at.
So what you should see, if nothing else, is at least several thousand of these lying scattered about the Ground Zero debris field. 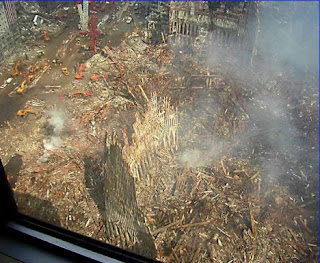 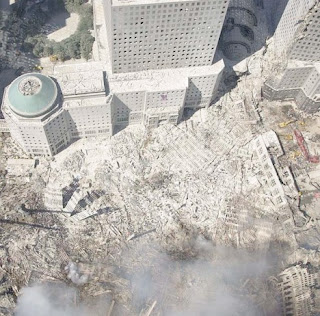 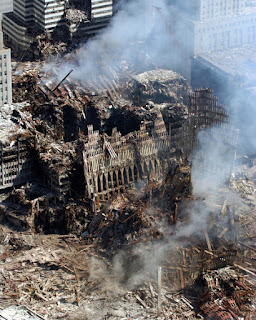 With 20 60′ prefabricated floor sections and 8 35′ sections per floor times 110 floors of each of the two World Trade Centers, that comes to over 6,000 welded floor sections that had to have “fallen” to the ground on Sept. 11th 2001.
I ask you to find one.  Just one.
I can find them for you. Steven Jones already found them for you (he just called them something else)  as did the RJ Lee study and the FEMA report.
They just look a little different now. 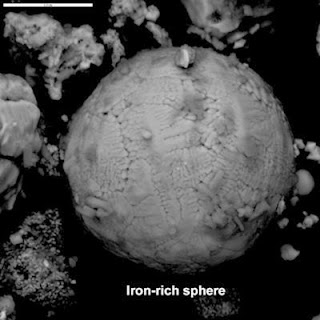 Now the question is, what could have turned the prefabricated floor systems into tons of “iron-rich” spheres in the blink of an eye?
My guess would be this. 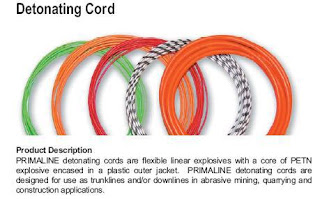 ***UPDATE*** As per Scott’s question, here is a hypothetical det cord layout plan view for one of the floors of the WTC.
click on image for larger view 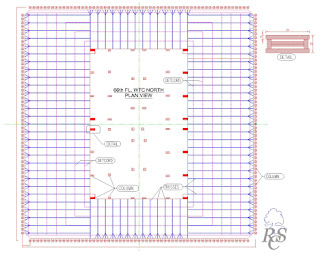 In this drawing, the PURPLE lines are the theoretical det cord locations, the BLUE lines are the trusses, and the columns are in RED.
Now for a cross-section of where the det cord could have been placed in relation to the trusses and the concrete floor systems.
click on image for larger view 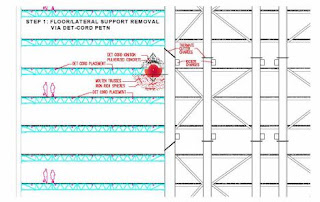 I hope this answers your questions Scott.
Posted by willyloman at 6:44 AM