Neither Gravity nor Thermite: Video Evidence Points to High Explosives Used in the Controlled Demolition of Twin Towers

(H/T David from HeavyWaterGate)
by Scott Creighton  (archived repost from Sept 6, 2010)
A video posted at Kenny’s Sideshow (quietly emerging as one of the best Truth sites out there) examines the formerly unheralded events that took place at Fresh Kills landfill right after 9/11.  It is intended to show the complex process that was set up to “recover” human remains and personal items from the debris from Ground Zero (Twin Towers, and Building 7) but I think it proves a great deal more.
Two glaring aspects of the video stand out; the first being the level of pulverization of everything in the Twin Towers, from filing cabinets, to desks, to the concrete in the floors, the carpet on the floors, and the ceiling tiles, drywall, chairs, computers… everything. Everything was pulverized to dust and unfortunately, that also includes the victims who died that day.
The next most important thing that leaps out at you as you watch this video is the evidence of the massive level of heat that had to be present during the relatively short collapse time of the Twin Towers.  Metal signs from the 34th floor are charred and burned (there was no fire on the 34th floor)… police officers guns have all the plastic and rubber handles melted off while their chrome finishes are burned away allowing for rust and pitting to set in and the same is true with their handcuffs.  Some guns were burned so badly, they are actually melted.
This is what is to be expected during an event using huge amounts of high explosives such as PETN or RDX, two materials commonly used in controlled demolitions. But don’t expect NIST to point that fact out… or current “leaders” of the Truth movement either, for that matter.  Funny how that works, ain’t it?
PETN actually burns hotter than most high explosives, at around 7650 deg. farenheit (4230 C) and it creates a detonation velocity of over 8350 meters per second. PETN is the core material used in what is refered to in the demolition industry as “det cord“, a high explosive in itself used to break up concrete structures during demolitions and also connect RDX linear shaped charges or “cutter charges” placed on the steel beams and columns in a controlled explosive demolition.
Kevin Ryan recently wrote an article in which he mentions what I have stated for several years, that there was an ongoing “wiring upgrade” for the security system in the Twin Towers that was going on right up until 9/11  (Ryan unfortunately then tries to suggest that the this has something to do with “super thermite”, a material that both Steven Jones and “Gregg” Roberts have admitted isn’t a high explosive and therefore couldn’t “blow up” a doll-house…). An article from 2005 describes part of the contract…

“According to Jeff Gallup, a former Stratesec manager who left the company for a position at Landtek, Inc., Stratesec installed the initial security-description plan—the layout of the electronic security system—at the World Trade Center. Gallup knows the WTC site well, since Landtek, like EJ Electric, was a prime contractor at the trade center. He was “intimately involved” with WTC security, he said in a phone interview last year, up to September 12, 2001, when “the F.B.I. left my office with all the contents of the WTC visitors database,” by then three-quarters of a million visitors’ badges.”  M. Burns, 2005

The security “upgrade” involved running new fiber-optic cables through-out both of the Twin Towers, on each and every floor ( above the dropped ceilings and beneath the metal floor pans of the floor above) as well as down the electrical access shafts located in the “core” of the buildings where the 47 massive steel columns were. This cover provided ample access to every single floor of the building regardless of the tenet’s security concerns, plus it allowed them to actually install the means of demolition right in front of the occupants without them ever suspecting the dangerous nature of what was being installed. 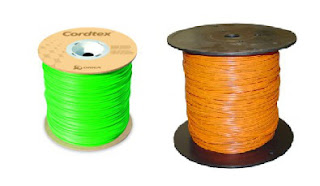 Now of course, you can read the label there, but if it was covered or wasn’t ever printed on the spool, you couldn’t tell the difference. It is my theory that what they did was basically run det cord up inside the cable chases that were installed up inside the lightweight concrete (image taken from NCSTAR report, page 6) of each and every floor of the Twin Towers. By the way, the images are from manufacturer sites: Green is det cord… orange is fiber-optics.
This is my own rendering of what I believe the “security upgrade” consisted of…. what I believe happened to the Twin Towers. 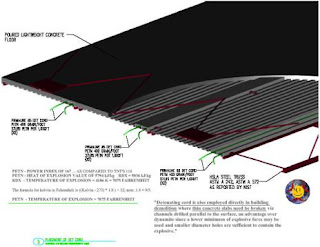 (you will notice that my temperature calculation for the detonation of PETN is a bit low… I figured it to be ” > 7050 deg. f” and it turns out according to Wiki to be 7650 deg. f. )
So why is all this important in relation to the video shown at the end of this article? Well, for several reasons…
1. The evidence of extreme heat disproves the Official Theory of what happened to the Twin Towers. In the official story, the primary event is a gravitational collapse of a weakened structure. Pulverization would not have occurred on such a complete level, but it is difficult to explain or prove that to followers of that theory. However, the evidence of extreme levels of heat, levels that are clearly hotter than jet fuel and “open burn” fires can produce,  prove that something else was in play on Sept. 11th 2001.  The RJ Lee report was the first to make this point perfectly clear.
2. The evidence of massive pulverization disproves the generally accepted “super thermite” story that was created and funded by the ultra-conservative BYU. In their “nanothermite” paper (paid for and “peer-reviewed” by BYU) Jones et al make the point very clear that they can’t tell if the material they found was capable of achieving a detonation velocity of anywhere near 3000 meters per second, which is needed to create a detonation wave.. therefore it couldn’t pulverize anything, much less concrete and office furniture ect.  This is actually admitted in the “scientific” paper, peer reviewed by BYU and published at a vanity press for “political reasons”

“I can not accept that the issue is put in my journal. The article is not about physical chemistry or chemical physics, and I could well believe that there is a political point of view behind the publication.” Chief Editor of the Bentham Open Chemical Physics Journal, Professor Marie-Paule Pileni, upon her resignation (translated)

Question: I was having a conversation with someone in the military who uses thermite when they enter doors and things. And that thermite doesn’t create and explosion. it just creates a bright light and instant melting, so is that because of air pressure that caused the explosions after the thermite went off or is there another reason?
Gregg Roberts: I wouldn’t say that thermite caused blasts, I would say that would have to have been (unintelligable)… other than explosives which the government has refused to test for (the same way Roberts refused to test for them?)… it would seem to make sence to do those tests when you can see things are shattered…”  Panel Discussion on 911

3. The evidence of a logical and plausible method of planting the high explosives in the buildings (something that for all their efforts (“1.8 million ceiling tile bombs” and “explosive paint”) the “nano-thermite” cult simply cannot do) and then clear evidence of an elaborate process to “scrub up” the remaining evidence from the Ground Zero debris. 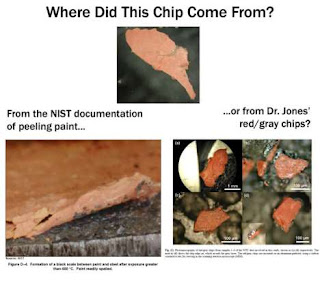 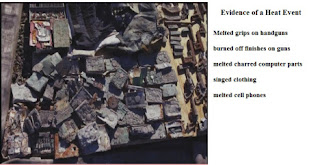 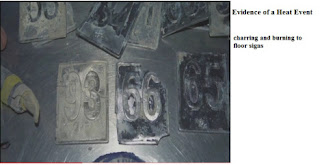 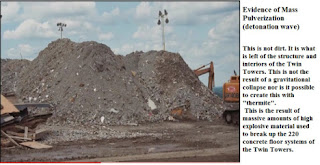 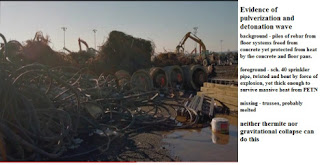 (trusses missing? floor pans missing?)
This is an outstanding video which goes to show the unprecedented level of effort they put into covering up the evidence of the events of 9/11.
An entire production facility was created and operated for 10 months to ensure that no hard evidence of a controlled demolition was buried at Fresh Kills to be unearthed at a later date when a future investigation may be undertaken.  The scope of the efforts taken and the planning that had to go into all of this is unbelievable.  Fresh Kills itself was shut down in March of 2001 so that they wouldn’t be bothered by the dumping of other material during this process. Every single personal item that was returned was “washed” and the autos and fire trucks were not only “washed” but they were also shredded “on site” (they actually brought in a massive shedder for this process rather than risk taking the vehicles off site). Photographs were strictly prohibited under threat of imprisonment and most of the people working the site were either FBI or some other members of various “security agencies”.  Three things they supposedly sifted for were 1. human remains 2. personal property and 3. unidentified material (which was put in its own containers)
They sifted for months and months, then when they were done with the 1.8 million tons of debris from Ground Zero, they scrapped up the top 2 feet of debris and sifted it again just to be sure. Then they literally buried it all under a foot of fresh soil, threw some sod over top of the whole thing, and quietly packed up and went off to their next project.
But the pictures and the videos remain and those who know what to look for can make use of them.
Scattered across lower Manhattan were another couple hundred tons of hard evidence in the form of Ground Zero dust.  That material they couldn’t recapture, they couldn’t control and in it lies solid hard evidence of the crime of 9/11.  They couldn’t control that material, so they did the next best thing… they controlled the unofficial investigation as best they could. Perhaps this video will also help expose the flaws in the cognitive infiltration of BYU’s “nano-thermite” mythology. Who knows.
Posted by willyloman at 8:11 AM