Beyond Stupid: Offical Version of Khahoggi Killing is Even Dumber Than Skripal Psyop 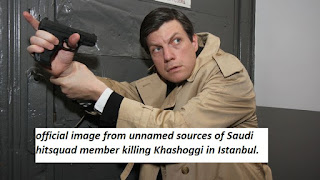 When even Donald Trump understands that your psyop sucks, you're in bad shape and should probably be fired.


"They had a very bad original concept. It was carried out poorly, and the cover-up was one of the worst in the history of cover-ups. There should have never been an execution or a cover-up, because it should have never happened. I would say it was a total fiasco from day one." President Trump

So lets run back over the official story real quick too see if I have it mapped out correctly.

According to the current version of the narrative:


Did I miss anything?

This is the dumbest international spy story I have heard since the Skripal case. And here is why:
MbS was not living up to a number of promises he made just a couple months ago when the complicit media, the bought off political class and the oligarchs they all served met with him over a three week period back in March and kissed his ring.

Back then he was the man. His decisions and his alone would determine who got what chunk of the newly neoliberalized Saudi Arabia and who got what part of their massive national wealth handed out in their new international investment program.

Like Pharaoh before him, MbS was a living God to our collective Mammon worshiping leadership class. But things started to change and he got closer to the Chinese and the Russians and started easing up on Iran and looking at Qatar as the most dangerous threat to his nation.

Earlier there had been an assassination attempt on his life.

In the wake of this event and all the pressure put on MbS to pony up the cash (every other word out of President Trump's mouth about this is "they have to pay") apparently he has yet to do so. And efforts to get King Salman to replace him have also failed. In fact, MbS has now been tasked with cleaning up Saudi's intelligence services, my assumption being they want to get rid of our assets planted deep within them.

Several arrests have been made in S.A. regarding this event but they have not released the names of those arrested and we do not know if they were members of the team sent to Istanbul or just folks within the Saudi establishment who support a coup or an assassination or any other form of regime change.

And now Trump says it looks like MbS did it. What new evidence he has has yet to be shared with us.

The official word for the administration is no one has yet to hear any recordings or see any videos of the event.

Remember when Russia was about to host the World Cup and the world would see them in a positive light?

What did they do according to our official story?

They decided right then to send some clowns to England to whack out a guy they couldn't care less about with a chemical weapon 10 times stronger than VX which didn't kill their targets and then they simply tossed the evidence on the ground somewhere as they left, making sure their faces were pictured in every surveillance camera from there to Moscow.

Here we are all this time later and the Saudis suddenly decide to send a basketball team over to Turkey right before Davos in the Desert using their real passports and official flights to whack out a guy you could kill with a good jump scare and apparently they are leaving body parts lying around like Symore Hersh's bullshit story about Navy Seals tossing bin Laden out a helicopter one piece at a time.

It was a haphazard psyop conducted to pressure MbS to do what we ALWAYS demand of our favorite dictators: hand over the loot and look out for our "national interests" above and beyond those of their own people.

"They had a very bad original concept. It was carried out poorly, and the cover-up was one of the worst in the history of cover-ups"