This is just a quick little photo essay for you.

Remember the Apollo 11 flag waving issue? The video broadcast to the world in July of 1969 purported to show two astronauts planting the U.S. flag on the surface of the moon. It was quite an achievement of propaganda and literal flag waving... but folks soon noticed the flag was waving when it shouldn't be waving because there was atmosphere on the moon and thus, no wind.

Did you know they cut out the scene of them planting the flag in the new movie First Man? Curious huh?

There was no video taken from the surface of the moon during Apollo 12 and by time they got to Apollo 15... they had fixed that little problem. Kind of.

I watched a documentary about the moon landing hoax and I saw an image, we've all seen it, the one where something is reflected in the astronaut's visor on the front of his helmet. This image. 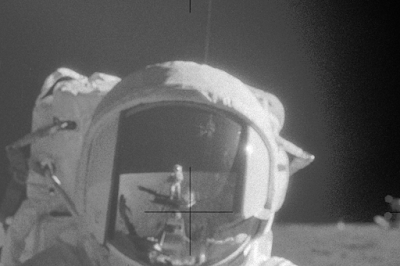 See the thing suspended in the air above the image of the guy taking the picture? Some say it's something off the lander but the lander is in the picture behind the subject. So what is it?

The video I watched thought it was a lighting instrument with "barn door" shutters, typical of the kind used in studios back then. 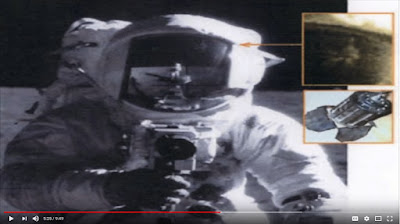 I thought "that doesn't look like a fernel or another lighting instrument... to me, that looks like something else you would find in a big studio or warehouse... 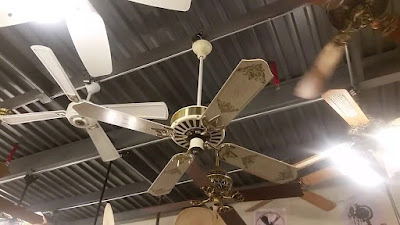 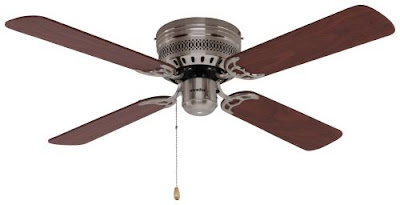 Back in those days when air-conditioning a space as large as a film studio or warehouse wasn't cost effective, they would have ceiling fans in them that kept the air moving and circulating. Plus they are a lot quieter than the old large a/c units and could keep them running while filming, since it was essentially a silent movie they were making.

Their "sun" lighting source had to produce a ton of heat and so they would need to keep the fans running that were out of the shot so technicians and off camera talent didn't suffer from heat stroke.

This would have the effect of moving the air in the studio and perhaps is what cause the flags to wave in the earlier footage they shot of Apollo 11 and 15 but it wouldn't be enough to blow the dust around.

I guess that could be a lighting instrument but since there is no hot-spot and it doesn't have the shape of the "barn door" shutters... I think, more likely, they accidentally shot an image that answers the question so many people had about what actually caused the flags to wave on the surface of the moon.

And the answer was: ceiling fans.

You wonder why they left out the flag planting scene in the new movie? Is it because they wanted it to represent an accomplishment for "all of mankind" like the actor said? Or is it because they didn't want youngsters being fed a new batch of nationalized mythology to look up the original flag planting video?

Or maybe it's simply because... its hot in that studio and the devas on the set didn't want to turn off the ceiling fans.