With Elections Looming and To Cover for Corrupt Netanyahu, IDF Moved Military Equipment into Place a Week Ago Before their "Reaction" to Gaza Rockets

H/T to James York who left a comment on one of my videos yesterday which spurred me on to do some research on this subject.


"Normally you are pretty good at keeping your "eye on the ball".... Khashoggi, the caravan, and now the fake bombing shit seem like distraction ploys to me. A few days ago Israel deployed 60 battle tanks to the border of Gaza... while the head of the IDF is making much noise about how "they have no choice" but to act...." J.Y.

This morning, Israel has attacked Gaza once again launching 80 airstrikes against targets inside the world's "largest open air prison"

Details regarding civilian casualties have yet to be released.

The Israelis claim, as they always do, the strikes are retaliation for 30 homemade rockets being fired from inside Gaza toward Israel. Several of the unguided bottle-rockets landed in Gaza, several were intercepted by Iron Dome and the rest fell uselessly in unpopulated areas just on the other side of the fence.

But Israel used them as justification, as they always do, to launch a massive attack against the Palestinian people living in Gaza. The VAST majority of them having nothing to do with the bottle-rockets. 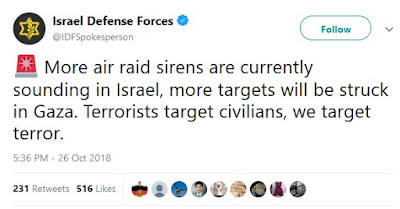 They also tend to stage these attacks during times when people in the U.S. are focused on other things. During Cast Lead the country was focused on all that "CHANGE" they were about to get when Obama took office. During Pillar of Defense, we had a presidential election to focus on. And during Protective Edge, it was the summer of 2014 and we were having a mass casualty event taking place it seems like once a week.

And of course now we have the Mad Fake Bomber and a migrant "invasion" to focus on.


In spite of the fact that we are told by the IDF (and the complicit media) that they only attacked in response to "terror" unleashed upon them by Hamas, the fact is, the terror was unleashed by the IDF yesterday themselves long before any home-made bottle rockets flew over the fence. On Friday Oct. 26th:


"Israeli forces have fired live bullets and rubber-coated steel rounds at Palestinians protesting along the fence of Israel, killing at least five of them and wounding a further 170, according to medical officials.

The death and injury toll was provided by Ashraf al-Qifra, spokesperson for the health ministry in Gaza.


Could you imagine the response if those bottle rockets had actually been fired BEFORE an Israeli attack and had killed 5 Israeli citizens and wounded another 170? Trump would have sent the marines in to invade Gaza and do to them what he did to a number of Syrian cities.

But that is just the most recent Israeli attack on Gaza citizens.

On Friday Oct. 12th the IDF snipers shot and killed 7 Palestinians, two of them children. 250 others were wounded.

And on Friday Oct. 5th, they shot and killed 3 Palestinians while wounding another 192. One of those killed was 12-year-old Faris al-Sirsawi.

Does anyone see a pattern developing here?

Israel attacks Gaza on Fridays because the Israeli PR assets understand that if you want to kill a story here in the states, you release it on a Friday while Americans are distracted with their weekend plans. By time Monday comes, the story is literally "yesterday's news" and the complicit media aren't blamed for ignoring it.

Another trend we see in these major attacks on Gaza is that they always seem to launch, in "response to terror" of course, when Prime Minister Benjamin Netanyahu gets in trouble in Tel Aviv over his rampant corruption.

On Oct. the 5th it was announced that old Bibi was going to be interviewed again regarding his ongoing corruption investigation. Apparently he and his wife take liberties as the leaders of "the only democracy in the Middle East" so much so even the Israelis have to say enough is enough.
Netanyahu is about to call for elections. They have to be held prior to Nov. 5th. These are the elections for the 21st Knesset which will determine which party holds a majority and who leads the nation of Israel.

Meanwhile the investigation into his and his wife's corruption is set to conclude any day now.
In Israel, nothing says "get out the vote" to the far-right Likud faction in the country like an attack on the people of Gaza and some good old fashioned "you need me to protect you from the savages!" campaigns that Bibi Netanyahu always runs on. It is the bread and butter of Likud's political life.

What else would you expect in a country were folks will travel hours to sit up on a hill and watch "the most moral army in the world" attack Palestinian civilians with white phosphorus bombs and cheer?

Therefore it is not without concern that Israel, well in advance of this latest round of bottle-rockets being launched, moved heavy military equipment to the border with Gaza just a week or so ago, making ready for a good old fashioned political attack on the Palestinians... just in case something happened.


"The IDF started ramping up its armored forces along the Gaza border on Thursday in a daylight show of force following a Security Cabinet decision to escalate retaliation for any violent incidents originating in the strip...

Israelis living in communities by the border fence say they have not seen such a significant concentration of IDF forces in the area in years.

"It only looked like this during Operation Protective Edge or several years ago when there were tensions. It feels like something is about to happen, or they want to send a message to Hamas to beware," one resident said." Ynet Oct. 18, 2018

Needless too say, the Security Cabinet is run by members of the Likud Party of Israel who are clearly focused on helping their party stay in power.

If you recall, Operation Protective Edge, to which they are referring, killed 2,200 Palestinians, 500 of whom were children.

To the Likud Party of Israel, Palestinian lives amount to little more than political props to be used or thrown away when needed.

It is true they wish to dispossess the Palestinian people of every inch of the land that was once called Palestine and it is true they have even larger ambitions for the borders of Greater Israel.

But for now it is enough to see how totally contrived these Friday attacks are and how they are POLITICALLY motivated... not defensively.

When reports come out detailing today's casualties, they will be reported here. You can expect Bibi to engage further in Gaza as his corruption case and the elections loom nearer.

Thanks to James York for the tip.
Posted by willyloman at 7:55 AM