While Peace Proceeds on Pace in Korea, the People of Hawaii Were Purposefully Subjected to 38-minutes of Terror

On the Korean peninsula leaders from South Korea and the Democratic People’s Republic of Korea (DPRK) met this past week in an effort to walk back the aggressive stance that’s developed between the two halves of one former nation. Today, the state media of the DPRK hailed this moment as historic as there are once again, hopes for peace and reunification on the horizon. Even the warmongering complicit media outlet CNN seemed taken in by the optimism.

“A North Korean state newspaper is celebrating the country’s leader over the resumption of face-to-face talks with the South, saying Kim Jong Un’s policy to improve relations were “brilliant” for “national reunification.”

The article in state newspaper Rodong Sinmun said recent high-level talks “proved again that there is no problem unsolvable if the North and the South pool their efforts.”

In talks Tuesday, the North agreed to send a delegation to next month’s Winter Olympics in South Korea and to hold talks with Seoul to ease military tensions…

Despite climate and terrain favorable for participating in cold-weather sports, North Korea hasn’t sent a delegation to the Winter Olympics since 1992.” CNN


Our various leaders have worked really hard over the last few decades making sure peace didn’t break out in the region. Peace isn’t profitable. And a potential reunification of the Koreas would undoubtedly effect some of our glorious national interest’s profit margins.


Recently the new president of South Korea has taken a less than aggressive stance toward their neighbors in the north and we couldn’t have that so all sorts of stories came out about “missile tests” that weren’t actually missiles and aircraft carrier groups “steaming” toward North Korea when they were actually headed in the opposite direction some 3,000 miles away for some R&R and drills near Australia.

Donald Trump did his part talking about “rocket man” and “fire and fury” and saying whatever he could to dissuade the South from even talking to their counterparts from the north. And last week when the north and south committed to and acted on peace talks (probably inspired by Vladamir Putin)… The Donald took little time to pat himself on the back for it. Fox News followed suit and have been doing so ever since.

Today the people of Hawaii got a bit of a scare. It looked something like this: 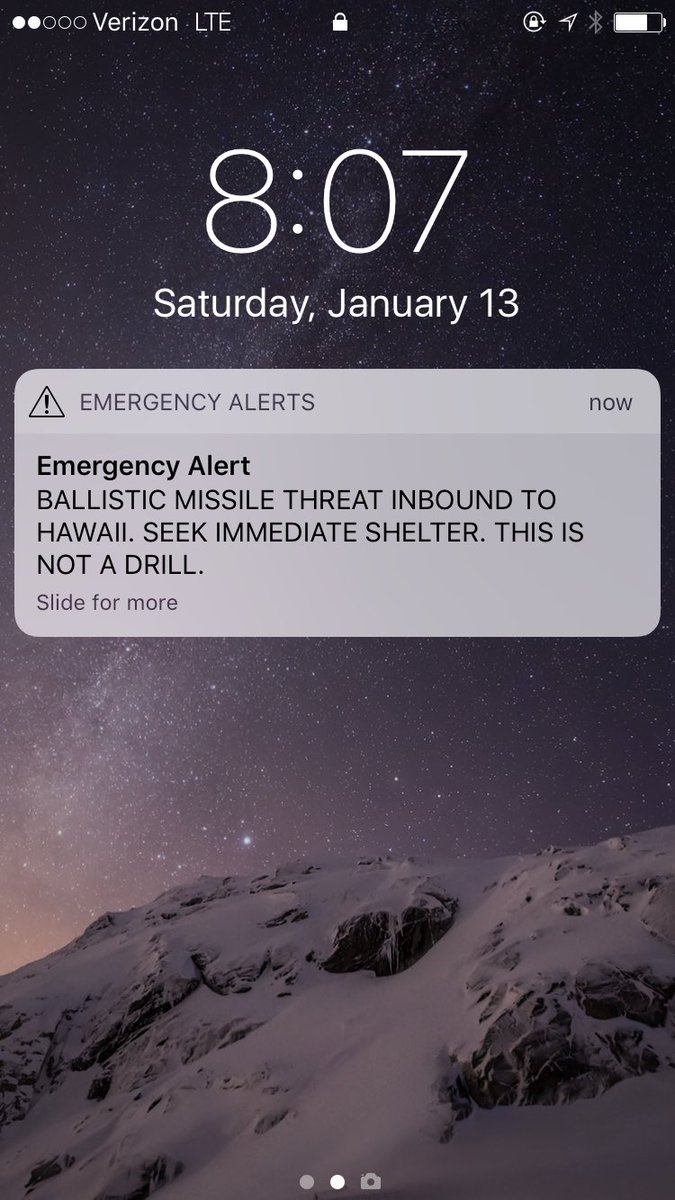 That is an official emergency alert that was sent to everyone’s cell phone in Hawaii. As you can see, it says there are incoming missiles, it isn’t a drill and everyone should take shelter immediately.
The panic and horror that ensued was tremendous.

People evacuated their vehicles on highways and ran for shelter in a nearby tunnel.
Children were terrified in schools as their teachers had no idea what to do next.

“The emergency alert, which was broadcast to smartphones just before 8:10 a.m., had been made even scarier with the words: “This is not a drill.”

Hawaii Gov. David Ige blamed the alarm on human error. He said an employee “pushed the wrong button” while testing the system during a shift change.

Richard Repoza of the Hawaii Emergency Management Agency, said the agency is working to determine what went wrong.” LA Times


The whole thing had been “a mistake” they claim. They said it was caused by one person “accidentally hitting the wrong button”

But that is an idiotic excuse.

Because apparently it took them nearly 40 minutes to hit another button to send word that the previous message was wrong.

And don’t tell me they didn’t know it had been sent… they all have cell phones too I guess.

Someone posted to Twitter that it was a “mistake” about 10 minutes after the original message had been send out on Hawaii’s emergency messaging system but few Hawaiian are on Twitter apparently and it didn’t have much of an effect.

For nearly 40 minutes the people of Hawaii were subjected to what basically amounts to a false flag drill which could have been conducted to get a sense for public reaction to an emergency like this one. Or maybe there was a real false flag in the works and it was scrubbed at the last minute.

As I have stated in the past, the cretins who run the world aren’t going to let the Sunshine Policy be renewed in Korea. It doesn’t serve their interests and their interests are the only interests our glorious leaders give a rat’s about… lets be honest about that.

But this latest “accident” that JUST HAPPENS to have occurred RIGHT AT THE MOMENT PEACE SEEMS LIKE A REAL POSSIBILITY… cant be a coincidence.  You would have to be mighty naive to believe that.

Honestly I don’t know what caused it… but I do know… Hawaii has a particular history when it comes to being used to kick off global wars. I guess that thought wasn’t far from the minds of the average Hawaiian today. I also know that the Hawaiian emergency alert program doesn’t have it’s own radars and early warning systems… it uses intel given them by the US Military… same folks who intercepted early warning of the attack on Pearl Harbor all those years ago.

But don’t worry… Ajit Pai is on the case. He has promised to get to the bottom of it. We’re all saved.

Posted by willyloman at 1:52 PM