With a sly smirk on his face and looking around demanding immediate confirmation from his guests, Chuck Todd said on his show MTP Daily "This feels like a spot... I fear this could be some Russian operation too. Designed to do what's happening now... in some ways we shouldn't rule out, you know... it is dividing us"

After a year of the most divisive presidential campaigns in our history and Hillary Clinton running on nothing but fear and loathing of "the others" (deplorables?)... and Trump doing something similar too be sure.. and then the same thing being done after the election and for the first full year of Trump's presidency with him being called everything from a woman hater to a rapist to a racist to a Nazi... and then a full year of Hillary Clinton blaming every identity segment in the country for her loss to Donald Trump... (including white married upper middle class women (her own demographic))... after all of that Chuck Todd has the nerve to suggest all this division we see now brought about by their own divide and conquer rhetoric being spoon-fed to the public on an hourly basis.. is the fault of the dreaded and mythological Russians.

As ridiculous as this may seem it is, by far, not the most ridiculous twist this story has taken in the last 24 hours.


According to reports from the MSM, officials are now saying "several" of the packages went through the US mail before arriving at their destinations and some even say ALL OF THEM were sent through the mail.


"FBI Assistant Director William Sweeney would not confirm the origin of the packages Thursday despite reports that investigators believed some came from Florida.

Several of the packages went through a US Postal facility in Opa-locka, Florida, two law enforcement officials familiar with the investigation said.

Notice how testy FBI Assistant Director Sweeney sounded in that last bit of his quote? "Obviously" "some" were in the system? Why did he say that? Because for the Secret Service to intercept the mailings to the former presidents, they had to be. Or else they got them some other way.


The lack of a postmark on most of the packages complicates all of this and could suggest the packages came from multiple places. It does appear there is some kind of postmark on the package directed to President Barack Obama." CNN (different article) updated 6am Oct. 26 2018

This is a remarkable feat of spin, is it not?

In spite of the fact that none of the pictured packages these fake bombs came in (a retired ATF explosives investigator told CNN from what he saw of the xrays, there was no way to detonate the devices so "then the individual's motivation was simply to spread fear, instill fear.". They also now call them "potentially explosive devices" and say things like "(t)he presence of what was believed to be pyrotechnic powder caused investigators to believe they could detonate" meaning... it's NOT explosive powder and they could NOT detonate) bore a postmark from the postal service, the official story is now morphing into... yeah, they ALL came through the US postal service.

Here is a group of photos that accompanied the CNN article in which they claim they all went through the post office. Notice the one that went to Obama residence also doesn't have a postmark stamp, though CNN tries to suggest it does. 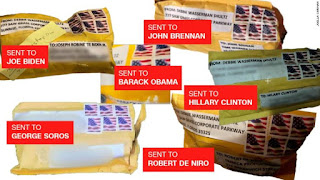 As you can see, not a single one of them has been postmarked. That is impossible if they went through the post office according to the official post office website:

A postmark is an official Postal Service™ imprint applied in black ink on the address side of a stamped mailpiece. A postmark indicates the location and date the Postal Service accepted custody of a mailpiece, and it cancels affixed postage. Since 1979, the Postal Service’s Postal Operations Manual (POM) has provided standards for postmarks applied to single-piece First-Class Mail®. Letters and flats that need to be postmarked come from carrier pick-up, collection boxes, retail counters, or lobby drop boxes. Postmarks are not required for mailings bearing a permit, meter, or precanceled stamp for postage, nor to pieces with an indicia applied by various postage evidencing systems.
The postmarking process uses the following three basic methods of imprinting:
A “local” postmark shows the full name of the Post Office, a two-letter state abbreviation, ZIP Code™, and date of mailing. Because the Postal Service is sensitive to the importance some customers place upon these postmarks, each Post Office is required to make a local postmark available. Lobby drops should be designated for this purpose with clear signage signifying its use.

We are now expected to believe that someone dropped off all these packages with misspellings all over them (Hillary was misspelled as was Schultz, Brennan and Florida), in one bin at one post office in Florida... and someone handled all of these highly suspicious looking packages, addressed to former presidents and important people, with this inside... 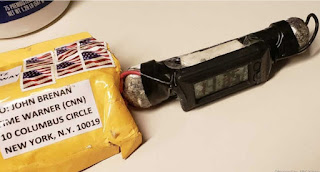 ... a pipe with end-caps and something attached to the side with heavy-gauge wires sticking off both ends...

... without putting a postmark on a single one of them.

The post office narrative is all over the place at this point. Even the New York Times and the Washington Post are parroting it in articles that completely fail to mention the complete lack of postmarks on ALL of the envelopes.

"But on Thursday, law enforcement officials determined that all of the devices were likely sent through the mail, with at least some of them passing through a United States Postal Service center near Miami" New York Times Oct. 25 2018


"Officials described the devices as PVC pipes stuffed with what appeared to be fireworks powder and glass. Electrical wires leading out of the pipe attached to an electric timer taped to the side, according to law enforcement officials speaking on condition of anonymity to discuss the investigation. Most of the devices appeared to have been sent through the mail system." Washington Post Oct. 25 2018

It would be impossible for all of these HIGHLY SUSPICIOUS PACKAGES to have made it through the postal system without having been stamped with a postmark. And yet, ALL OF THESE MSM OUTLETS are reporting that they did go through the mail service IN SPITE OF THIS GLARING FLAW in the official story.

Not only that... but post offices, believe it or not, have people who are trained to notice SUSPICIOUS PACKAGES like the kind we see in the photos above and they have XRAY machines to examine them.

Here's one more tidbit of info... the politicians and police authorities are all screeching that these were NOT "hoax devices" in spite of the rising number of bomb-squad experts saying the direct opposite.

And the prestitutes are parroting that line as if their paychecks and their assigned parking spaces depend on it.

Are we to believe NONE OF THEM are smart enough to noticed just how stupid it would be to put a timer on a bomb... and mail it through the U.S. post office?

WTF do you set the timer for? Thursday? Next week?

The postal service aspect of this story is clearly an important one because without it, one has to ask how the Secret Service "intercepted" the bombs without them going through the post office and that is simply not possible.

Of course, it's also not possible that all of these clearly suspicious envelopes would escape scrutiny at the post office and be sent on their merry way without a single one getting a postmark... but, there it is. 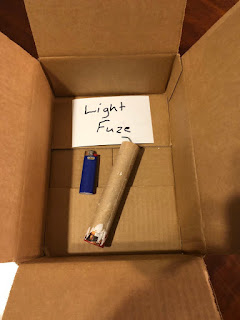 Posted by willyloman at 8:52 AM