Back in April of this year, a journalist in Gaza wearing a vest marked "PRESS" was deliberately shot and killed by IDF snipers. That brings the total number killed to 18 since the start of the Second Intifada. No one of consequence called for regime change in Israel.

As of July this year, there had already been six journalists killed in Mexico by drug cartels linked to Mexico's corrupt government and our own intelligence services. The last one beaten to death in a horrific murder. Last year the number of journalists murdered set a new record for the country at 42. As far as I know, the MSM and Lindsey Graham have yet to call for sanctions and regime change.

In Columbia there have been two murdered for covering things the rulers didn't want covered. But we like Columbia's neoliberal government so for now, not a peep about changing it.

What makes the disappearance of Jamal Khashoggi so different? This is a question a few writers and researchers have been asking themselves and a couple of us have come to some honest, sensible, business-oriented answers... since of course the U.S. and her allies are all about Business.


Now let's be clear. I write about Khashoggi's disappearance because the only hard evidence that we have before us is this... 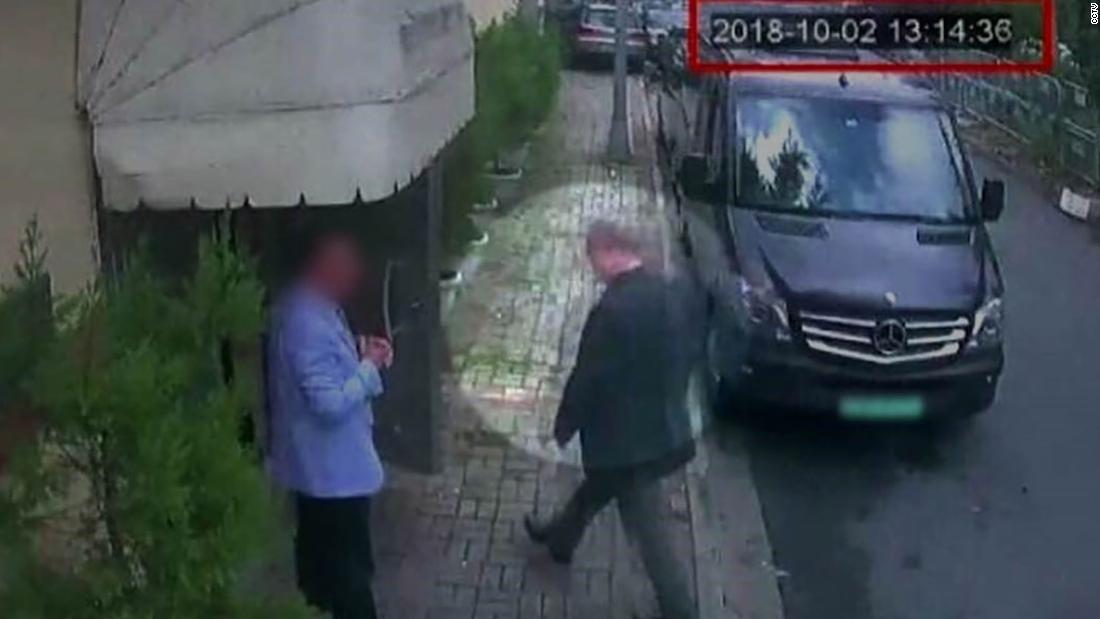 That is a blurry image of a middle aged man walking toward the door of the Saudi consulate in Istanbul. It is not proof of a murder. It is proof someone walked toward a door and then entered the building.

Everything else is speculation or statements from "anonymous sources close to the investigation" meaning it's all baseless rumor, innuendo or deliberate disinformation.

Therefore it is also entirely possible that Khashoggi is not dead by the hands of the Saudis and simultaneously... it is.

But it is not definitive by any stretch of the imagination in either way... unless all of a sudden you take our intelligence assets at face value as if they never lied to us before. Which is quite a leap of faith in my opinion.

All of the journalist murders I listed above have definite proof of their demise. Bodies. DNA. Causes of death. Death certificates. Coroner's reports. Things of that nature. Here there is only that grainy image taken from a grainy video of about 4 seconds in length. And that, boys and girls, is it.

So why all the pressure being put on Saudi Arabia to essentially foment a regime change in the Kingdom of Saud over a grainy picture of a man who set up a Saudi Regime change NGO in Delaware back in January of this year? A regime change NGO promoted by the National Endowment for Democracy.

Why are MSM outlets and even so-called "alternative anti-war" (Common Dreams, Moon of Alabam and others) ones suddenly parroting the likes of Bernie Sanders and Lindsey Graham in calling for Mohammad bin Salmon's removal from office?

Was the murder so brutal that it offended even the hardest regime change advocates in D.C. and their allies in the Washington Post? Do they not know the UAE hired a for-profit death-squad based in the U.S. to kill political rivals in Yemen in vicious brutal ways from 2015-2017?

In one case the American former Special Ops mercs put a big bomb on the door of a building they thought their one target was holding a meeting with a whole bunch of others. They hoped to kill EVERYONE in the building but were too late. So later they developed a methodology of using bikes to put bombs on cars in busy traffic intersections killing their targets that way. Them and anyone else who happened to be close.

Have you ever seen someone die slowly after a bomb goes off and blows off their legs or arms or rips open their guts? It's horrible. And they weren't even the target.

And yet this hit squad operated with impunity for a favored nation of ours and most involved with the operation find it hard too believe our military and political leadership didn't know about it. Notice, it started under Obama and continued under Trump. What a shock huh?

You think the alleged abduction, torture, murder and dismemberment was so shocking to those folks they just HAD to do SOMETHING?

Or do you think it was because Khashoggi was pretending to be a journalist at the Washington Post as he fought for regime change in Saudi Arabia?

As some journalists , some news agencies and bloggers have pointed out, Khashoggi's disappearance perfectly coincides with a number of international events that make this case rather suspect. Unfortunately that number is relatively low.

Khashoggi had extensive ties to Lockheed Martin, the old guard of Saudi royalty, the CIA and other intelligence assets... and of course... his very own regime change focused NGO.

We also know that the deal President Trump made with MbS and Saudi Arabia last year for 110 billion dollars worth of weapons sales was falling through and a deadline for them to purchase the horribly untrustworthy THAAD missile defense system came and went on Sept. 30th of this year with no purchase by MbS.

And we know that the Saudi ambassador to Russia was worried about the U.S. imposing sanctions on Saudi Arabia as recently as Sept. 21 due to them buying the Russian S-400 system instead.

Add to all that the Davos in the Desert meeting taking place this week which the risk of sanctions would seriously screw up... and you have a perfect storm of motive for someone OTHER than Saudi Arabia to either kidnap, kill or "send into early retirement" one Jamal Khashoggi. Right?

Now, 110 billion dollars in deals promised to the MIC is a lot of money, that is for sure. But the question kept rattling around in my feeble little brain... is that really enough to motivate every sector of American empire support, including the fake "alt-right and alt-left" outlets to go all out calling for YET ANOTHER regime change operation in the Middle East?

And my answer was "no"

Then I started digging again and what I found makes that 110 billion dollars look like something I give to the local homeless guy every morning when he shows up lightly rapping, rapping upon my chamber door.

Try 4 trillion on for size. Four Trillion spread across every facet of our glorious business community and stretching into every pocket of every director sitting on both the U.S. Chamber of Commerce and the for-profit Central Bank system.

Now THAT is something that EVERYONE can get behind, huh?

Yes, MbS is on the outs as they say but it's not entirely due to his reluctance to buy U.S. made crappy weapons of war (though that is part of it)

What is really at play here is his apparent reneging  on an even bigger deal and an ideological shift that made him the darling of all neoliberals in D.C., New York, London and Tel Aviv.

You see, MbS was installed by our intelligence assets for one purpose: he was finally going to be the Saudi royal family member to fully neoliberalize Arabia on behalf of our hot money speculators and Big Business interests.

The plan was called Vision 2030 (put together by globalist neoliberal technocrats from McKinsey in 2014) and when he first signed on for it (open financial markets to hot money speculators and Wall Street, privatization of everything from nationalized oil company to healthcare) MbS immediately became the DARLING of the Middle East. Man, the right and left of the Business Party loved him to death. Lindsey Graham drooled over him right along side Chris Mathews. Obama praised him as did Trump and everyone in between.

They coupled that with some bullshit about letting women drive cars so the left would get on board and suddenly the brutal dictatorship in Saudi Arabia was something left of Sesame Street. Bert and Ernie would still get beheaded for being gay, the Grouch would have his trash-can privatized and Big Bird would still loose his head for asking too many questions... but the facade was going to hold and a Saudi Arabia would be the new Shining City on the Hill.

All was great in the land Colonel Thomas Edward Lawrence.

But then a funny thing happened on the way to neoliberalization: the vulture capitalists kept being told ... to wait till the feeding frenzy could begin.
The oil company IPO was the biggest single disappointment for the masters of the universe but there were many others detailed in the Vision 2030 plan. The IPO, the largest single offering of it's kind in history, was supposed to have already taken place, making folks like Exxon, Goldman Sachs and BP shareholder in Saudi Arabia's massive oil business. But it never happened and from the looks of it, the owners of all things planet Earth are getting tired of waiting around for the feast.

Mohammad bin Salmon was raised up and made the heir apparent to the throne in Saudi Arabia ahead of older, more established royal family members for one reason and one reason alone: he was willing to allow the West to roll into the country and chop it up and sell it off for profits.

Keep in mind... by 2014 the glorious captains of industry and banksters had already digested their latest consumables found in places like Libya, Ukraine and Iraq. Syria was resisting and the Russians and Iranians were making it hard for them to anticipate when they would get their next mergers and acquisitions meal fed to them so they needed something to tide them over so to speak. They needed new markets to exploit and pillage and Obama apparently refused to invade Venezuela so something had to give.

Then along came a power struggle in a country they have coveted for decades. A nation with tons of state-owned property and businesses and services they could consume.

All they needed was a front-man on the inside they could promote and then control.

He was young, would be their man for decades to come and his youth made him seem like something they could promote as the new face of the old kingdom.

But something has changed in him and thus, in our masters' opinion and trust of him.

Hell hath no fury like a globalist spurned and what we see now is clearly a ramification of that love lost and turned to hatred.

Is it a coincidence that all of these things are coming to a head at the exact same time a man committed to removing MbS from power goes "missing" at the consulate in Istanbul?

Only this one will be fueled by the fire of an unrequited love and the desperation of vulture capitalists starving for another carcass upon which too feed.
Posted by willyloman at 7:51 AM