S.A.'s Full Official Statement on Khashoggi Investigation and the Possible Outcomes It Portends

Overnight Saudi officials have released the first part of their investigation into what happened to Jamal Khashoggi on Oct. 2nd of this year.

They now claim he got into an altercation with several men who were at the consulate in Istanbul to "discuss" with him his return to Saudi Arabia which then resulted in an argument with the men and Jamal being put into a choke hold of sorts which resulted in his death.

From that point, the story goes, a cover-up ensued.

Here is the actual statement released by the Foreign Ministry.

According to the statement, 18 Saudi nationals have already been detained as a result of this investigation while several others have been fired from high-ranking positions.

"Ahmad al-Assiri and Saud al-Qahtani, both widely known figures who shot to fame during the crown prince's rapid rise to power, were among five high-ranking officials who were dismissed over Khashoggi's death. Eighteen others were detained.

Assiri is a former two-star general who is considered the chief architect of Saudi Arabia's war in Yemen. Qahtani is Prince bin Salman's communications chief and an outspoken supporter of his controversial policies over the years"

Deputy intelligence chief Maj. Gen. Ahmed al-Assiri "served for two years as the public face of Saudi Arabia's military intervention in the war in Yemen before his intelligence posting"

Gen. Rashad bin Hamed al-Mohammad was director of the General Directorate of Security and Protection.

Zero Hedge posted a quote from a Tweet sent out by  Ali Shihabi, Founder, The Arabia Foundation:


"The removal of two top officials, a cabinet ranking, very powerful and close advisor of MBS and the Deputy Head of Foreign intelligence + 4 other Generals in foreign intelligence (virtually its whole top leadership) cannot be written off as a cover up. This is unprecedented."

"This is not saying "rogue killers" but implicating virtually the whole top leadership of foreign intelligence. They carried out a mission that went sour very quickly and tried to cover it up initially. Bad news travels slowly to the top."

As this quote confirms the idea that a number of intelligence heads seem to be getting the ax over this, it's important to note what Zero Hedge fails to mention and that is... this guy, Shihabi, was practically in love with Mohammad bin Salman as he moved to "liberalize" (neoliberalize) the kingdom's economy. He lives and operates his "think-tank" in D.C. and is a pure neoliberal cheerleader.


"On MSNBC’s Morning Joe, after saying the “crown prince” has engaged in a “massive corruption crackdown” (a wholly PR frame discredited earlier this month by the New York Times, 3/11/18), host Mika Brzezinksi teed up Shihabi to comment on Saudi Arabia. The softball interview that followed hit all of the regime’s central premises without question: as well as “cracking down on corruption,” bin Salman is “modernizing Saudi Arabia” and “taking on the religious establishment.” ...

In spite of Ali Shihabi's assertion, the truth is, MbS is not implicated in this plot or at least, he doesn't have to be.

U.S. and British intelligence has long standing ties to Saudi military and intelligence agencies. That is a fact that is unavoidable.

What is also unavoidable are:
Truth is... the Saudis are getting closer to the unholy union of China and Russia over the past two years under the leadership of this king and the Crown Prince, Mohammad bin Salman. This is an undeniable fact.

What is also undeniable is the fact that our media and political hacks that make up the harbingers of the status quo over here don't give a crap about a single intelligence source being burned by one of our "special friends" in the Middle East.

To move them all, each and everyone from both sides of the artificial divide, in unison toward demanding sanctions against Saudi Arabia over this event, must have taken an issue of much greater import to their owners.

That list provided above might provide a glimpse into the kind of turmoil that could blow the entirety of the complicit political and media columns in the same direction at the same hell-bent for glory pace.

To that end, it is also important to note that in spite of claims that the Kingdom was looking to stage a coup against MbS for this embarrassment, instead it appears the king himself has decided to grant MbS even more power over a certain faction of their government... specifically... the intelligence apparatus.

Here is an official statement from the Saudi Foreign ministry further explaining what they are going to do in the wake of this event: 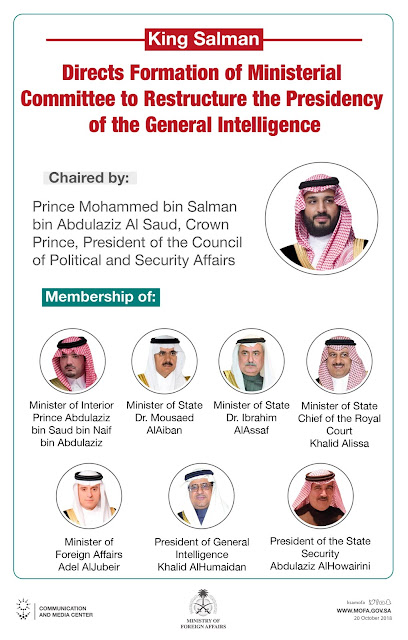 With the removal of these 5 high-ranking members of Saudi intelligence officials and the move to restructure the General Intelligence division itself, it would certainly appear one of two things happened here:

The first possibility is that the Saudis decided to abduct and arrest a citizen who lived in the U.S. and worked for the CIA's Washington Post and who was an outspoken critic of MbS and Saudi Arabia's failure to "modernize" their economy fast enough to appease the American oligarchs he had come to know.

That being the case, they would have made that decision on the eve of a major event they host every year looking for foreign investments knowing full well a smack in the face like this would result in the U.S. imposing sanctions on them and nullifying the entire point of the conference.

Seems somewhat short-sighted and even pathologically detrimental to their ultimate goal.

The other possibility is someone from our intelligence services called in some markers and they decided to put some serious pressure on MbS and Saudi Arabia to live up to the Lockheed Martin deal, the rest of the 110 billion dollars worth of letters of intent Trump got last year and that all important 2 trillion dollar IPO offering for the Saudi oil company and all the rest of the privatization deals our glorious leaders are chomping at the bit to get their mitts on.

In that version we would see something similar to the event that supposedly took place in Istanbul on Oct. 2nd 2018. The only difference would be it was done under the radar of an official act with the intention of framing the Crown Prince in the court of public opinion.

Of course that would be an extremely dangerous game to play in a place where folks get beheaded for simply writing negative things about the monarchy.

So there is certainly precedent for this kind of action and these kinds of ambitious spook-types.

There is one other final option and that is... this whole thing has been concocted by the Saudis to take the wind out of the sails of the globalist regime changers and their  cheerleaders.

It may be the Saudis make this announcement, "arrest" some low level operators and "fire" some upper level ones and then they pony up and pay the 15 billion to mothball some THAAD systems, buy the rest of the military equipment they agreed to a year ago and then offer up their national oil infrastructure to the masters of the universe.

In that version, the Americans would suddenly start buying the current Saudi story and everyone will suddenly forget their latest regime change manufactured hero Jamal Khashoggi.

That's how we'll tell how this really worked out.

Until then it's still speculation, second guessing and sooth-saying.

Like always in neoliberal geopolitics, now we have to follow the money and see what happens. If the Saudis revamp their intelligence agencies and purge corrupted officials with links to our own and then refuse to bow to pressure and fork over trillions of bucks worth of cash and assets, we'll know what happened to Khashoggi. And by extension, we'll also know we have a rough couple years ahead of us.

On the other hand, if they lock up a few token folks leaving the rest of our assets in place and pony up to the banksters, MIC and OILigarchs, we'll know then what happened to Jamal as well.

These are the twisted politics of what Halford Mackinder called "the world island" and unfortunately they will have serious ramifications across the globe one way or another.

On the positive side... at least is isn't boring.
Posted by willyloman at 6:45 AM