A number of "alternative" websites (Common Dreams and Moon of Alabama to mention just two) have latched onto the "cleaning crew cover-up" story which is obviously intended to "fix" the pending narrative that the Turkish forensic investigation yesterday found nothing in the Saudi consulate when they were looking for evidence that Jamal Khashoggi was abducted, tortured, killed and dismembered in that location on Oct. 2nd of this year.

The story is so full of stupid it defies logic that NO ONE seems to understand what it was they saw yesterday. Here is an image of what everyone finds "remarkable"

"You couldn't make this up!!!" screeches al Jazeera... 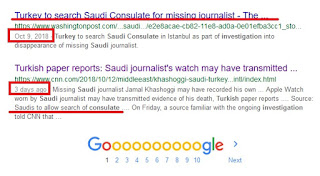 It was three days ago when the Saudis agreed to let the Turks investigate the so-called "crime scene" and 7 days ago when Turkey announced to the world and the Saudi leadership that they wanted to.

Does anyone actually believe the Saudis would wait until MINUTES before the crime scene investigators got there to start scrubbing up the evidence?

"The cleaning crew was seen entering the consulate shortly before Turkish investigators were set to arrive to carry out an "inspection" in search of additional evidence of who was behind the disappearance of Khashoggi, a frequent critic of the Saudi royal family."

If the Saudis were concerned about the optics of a well-prepared cleaning crew arriving on the scene of an alleged murder just moments before the start of an investigation that is being closely watched by the international community, they did not show it—the crew walked in the front entrance of the consulate in full view of Reuters and Associated Press cameras and journalists" Common Dreams

"On Monday, while the cover up story was thought out, Turkish investigators were finally allowed to enter the Saudi consulate. Before they arrived a cleaning crew entered the building (vid) to prepare the presumed crime scene." MoA


Is anyone aside from Moon of Alabama and Common Dreams really that stupid?

The crew pictured above is in fact a cleaning crew... but they aren't there to work BEFORE the investigators arrive and do their work... they are there to clean the place AFTER they are done.

Forensic investigators use a number of chemicals and reagents and carbon dust and all sorts of nasty crap to do their work. When they are done, there is a mess to clean, which is clearly what these guys are there to take care of.

Of course, that doesn't stop the complicit media (and you can the fake alternatives into that category these days) from starting the all important spin that will be needed to keep pressure on Saudi Arabia to buy those Lockheed Martin useless missile defense systems.

"What does it say about the credibility of an investigation when a cleaning crew fully equipped with boxes of chemicals, mops, trash bags, and... milk arrives at the scene of the alleged crime right before the probe begins?" Common Dreams

Yep. We get it. You are already dismissing the "credibility" of the forensic investigation before it even got started. Gee I wonder why that it.

Perhaps because the outcome is already understood by many whom shall remain nameless, that it will be a negative result?

My question is... why do they even NEED a forensic investigation of the crime scene... if... as they have claimed...

"A day after President Donald Trump "literally put a price tag" on the life of missing Washington Post journalist Jamal Khashoggi by saying halting weapons sales to Saudi Arabia over his alleged murder would be a "tough pill to swallow," Turkish officials have now told U.S. officials they have video and audio recordings of Khashoggi's torture and murder inside the Saudi consulate in Instanbul." Common Dreams


Have we forgotten the bullshit story of the I-Watch recording of the event and Apple's statement that it couldn't be true because they don't have a fingerprint verification feature on them?

Have we forgotten part of that ridiculous lie was they had a VIDEO of the abduction, torture, murder and dismemberment of Khashoggi?

If they had a video of the outrageously over-dramatic event... why do they need a forensic investigation from the scene? What is that going to prove beyond what a video of a screaming Khashoggi in the halls of the Saudi consulate?

Does that make any sense to anyone?
Posted by willyloman at 8:04 AM