The Khashoggi Psyop as a Barometer of Truth 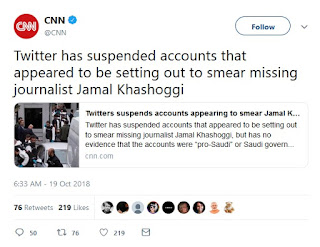 Caitlin Johnstone, catte from OffGuardian, Whitney Webb from MintPress News, Penny from Penny for Your Thoughts and a relatively small number of other credible alternative investigative journalists out here are busily doing their best to bring our attention to the red flags that are draped all over this ridiculous story of the missing fake journalist, Jamal Khashoggi and the regime change propaganda that surrounds it all.

To their credit, they are doing this at a time when the Deep State approved conventional wisdom across the fake divide of the two party system has immediately, and for no real reason, congealed around a narrative devoid of actual evidence of anything other than a blurry image of a middle-aged man walking into a door at the Saudi consulate in Istanbul.

They should all be given credit for having the courage of their convictions to tell the truth in the face of the growing bipartisan demands for yet another globalist-sponsored regime change operation taking shape right before our eyes.

In three months all the fake truth-tellers out there will be where explorers like these women are right now. That's how it always is. The phonies back the consensus narrative til the damage is done, then they throw up their hands and screech "look at that!!" while asking for your donations to help them keep telling you all that "truth" they've been peddling.

Planners of such things know the shelf-life of a psyop is limited because our attention spans get shorter as Apple I-phones get more expensive. Google's phone offers features that PROVE to you it's ALWAYS spying and recording everything you do and today's simple minded consumers think somehow it's a bonus. Critical thinking and long attention spans have become nothing more than collateral damage in the War on You.

Or maybe they were the target all along. Remember, anything they destroy in the ongoing Global Overseas Contingency Operation was a terrorist... so... it follows if they can wage a war on "terror" they could also do the same with "intelligence' maybe?

Those who dare to tread where few will follow regardless of the clarity of the path they blaze, should be acknowledged and remembered for their integrity and courage.

Hopefully there's a little Gary Webb in all of us out here as he's now demonized by the likes of the CIA's Washington Post (you can probably figure out why) and we are all aware a similar fate awaits us all.

When folks tell you the truth in spite of the pain, in spite of the pressure, you should take note and appreciate the work as well as the fortitude it takes to do it because I promise you, sometime in the not so distant future, you wont see it again.

And we will all miss it when it's gone.
Posted by willyloman at 6:32 AM